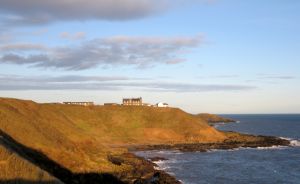 Collieston
Collieston is a fishing village about 15 miles north of Aberdeen, with a harbour set in a coastline of rocky cliffs riddled with caves. For many centuries the area had a  tradition of fishing for speldins, small fish which were usually cured by splitting, salting, and drying in the sun on large rocks.

The church is a large 19th-century building, but it houses tombs of the Earls and Countesses of Errol dating to the 16th century. The most famous burial here, however, is not a nobleman, but a notorious 18th-century smuggler by the name of Philip Kennedy. Kennedy was finally killed by an exciseman who was put on trial for murder but acquitted.

On a happier note, Collieston is known for a folk dance called the 'lang reel of Collieston', which was traditionally danced at local weddings.

Immediately to the south of Collieston is the vast expanse of Forvie National Nature Reserve, a stretch of sand dunes leading all the way to the River Ythan at Newburgh. On the cliffs over Rockend is Forvie church, the last remnant of a village that was swallowed up in a mighty sandstorm in the 14th century.

More self catering near Collieston >>

More bed and breakfasts near Collieston >>