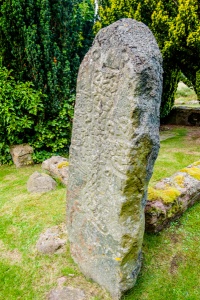 Just inside the entrance to the churchyard in the secluded Grampian village of Migvie stands a 2.1m high block of gneiss, carved on both sides. On one face of the stone is a cross, taking up the entire surface, and decorated with interlaced knotwork.

At the top of the cross are carved two circular projections that might represent loops used to hold a metal cross (for example, in a necklace). In the angles of the cross are traditional Pictish symbols including a horseshoe and v-rod, a horse and rider, a double disk and z-rod, and a pair of shears.

The reverse of the Migvie Stone is carved with a worn representation of a horse and rider. This type of stone is called a cross-slab, as the cross shape is simply incised onto the stone rather than shaping the stone like an actual cross.

This type of 'mixed' Christian and Pictish stone is known as Class II, as compared to Class I which are carved with pre-Christian symbols only. It is possible that the use of a carved cross indicates that the stone was used to mark a gathering place for preaching. The most likely date for the Migvie Stone is the 7th or 8th century. 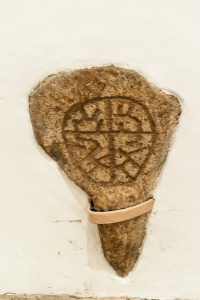 Carved stone inside the kirk,
showing a crucifixion scene

Don't overlook the kirk! I only mention this because I walked right past the Pictish stone, scratched my head a bit, and wondered what to do next. I wasn't even going to try going inside the kirk until I saw that the doors had been beautifully carved with a stylised Pictish cross (I discovered later that this is designed to look like the cross-face of the Migvie Stone). Intrigued, I tried the doors, and to my surprise, they opened, and I stepped inside to find something completely unexpected.

The interior of Migvie church has been transformed into a display area like an art gallery, with Biblical inscriptions on the walls. More interesting from a historical perspective, there are three small Pictish stones on show. The largest, near the entrance, is carved with a notched rectangle and z-rod above a crescent and v-rod.

This stone is quite compelling, with excellent carvings; though they are worn, the figures can easily be made out. On the wall is a peculiar crucifixion scene on a small, V-shaped stone, and a fragment showing two pairs of legs and feet.

Oh, and don't worry if the interior of the kirk seems dark at first; step forward boldly and movement-sensitive lights will come on, illuminating the display area.

The kirk, no longer used for services, was transformed in 2001 by the local laird, Philip Astor, in memory of his parents. Together with local artists and craftspeople, he succeeded in creating an unexpectedly beautiful exhibition space.

I loved the kirkyard stone; the carving is so complex and beautifully done that it is almost too much to take in at one go! By contrast the stones inside the kirk are much smaller, and in some ways, easier to appreciate because of that.

The kirk itself has been wonderfully restored, and makes a marvellous area to display the finds, though at first glance I was taken aback by the 'un-churchlike' appearance of the interior, but I soon got over that! It really has the feel of a modern art gallery rather than a kirk. 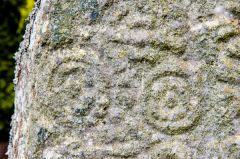 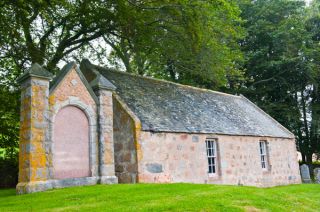 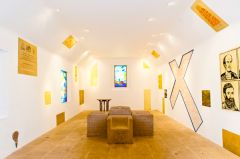 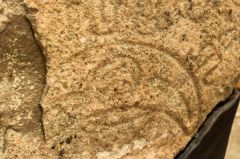 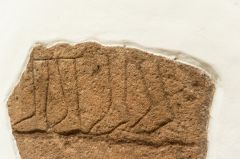 About Migvie
Address: Migvie, Grampian, Scotland, AB34 4XP
Attraction Type: Prehistoric Site
Location: Migvie kirk is on the north side of a minor road off the A97, north of Logie. There is a small parking area near the kirkyard gates, and along the verge, but in truth there is unlikely to be anyone else about!
Website: Migvie
Location map
OS: NJ436068
Photo Credit: David Ross and Britain Express

More self catering near Migvie

More bed and breakfasts near Migvie