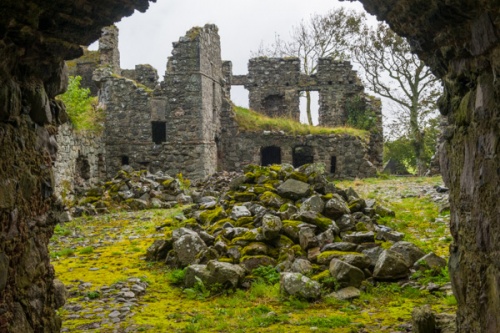 An imposing ruin of an early 15th-century tower house, Pitsligo Castle was built around 1424 by the Fraser family of Philorth. Ownership later passed to the Forbes family of Druminnor, and it was they who extended the castle to roughly its current layout.

In 1633 Alexander, the 8th laird, was named Lord Fobes of Pitsligo by an Act of Parliament. Lord Forbes built the nearby kirk, with a wonderful laird's loft over a family burial vault. In 1635 he turned his attention to the castle, greatly enlarging the medieval tower with ranges of buildings around a courtyard.

The 2nd Lord finished his father's work, creating a luxurious residence with opulent interiors. Every window was glazed - a measure of just how much wealth the laird lavished on his new home, with became one of the finest residences in north-east Scotland.

Like so many historic houses in the area, the fate of Pitsligo hung in the balance during the Jacobite uprisings in the 18th century. The last Forbes of Pitsligo, another Alexander, supported both the '15 Rising and Bonnie Prince Charlie's 1745 rebellion.

After the Stuart defeat at Culloden, Forbes was forced to flee for his life. He was declared an outlaw, with a price on his head, but though he lived on the run until his death by natural causes in 1762, he was never betrayed to the government soldiers who sought him. Unfortunately, while Fraser was an outlaw Pitsligo was seized by the crown. 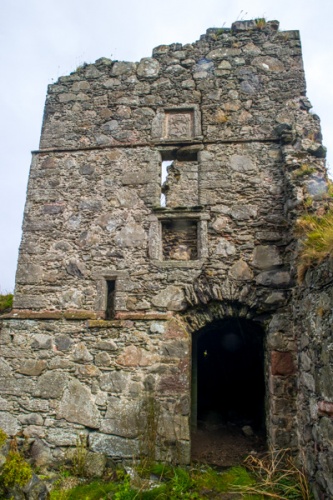 The castle was sacked by King George's troops, and allowed to decay, becoming little more than a crumbling ruin. Then in 1989 a descendant, publishing magnate Malcolm Forbes, purchased the castle estate and restored the fortress - if not to its former grandeur, at least to the point where it was no longer in danger of falling down.

After Forbes died in 1995 the castle passed to the Pitsligo Castle Trust, a charity group that also maintains the historic kirk nearby and are developing a Scottish Heraldry Centre and Jacobite museum.

Though still a partial ruin, the castle has a wealth of architectural details, including a number of heraldic carvings, incorporating arms of both the Fraser and Forbes families, which can be seen over doorways in several places.

There are 2 panels on the stair tower. One, made in 1577, bears the royal Stuart coat of arms. The second, made in 1603, shows the Great Britain arms, marking the accession of James VI to the English throne.

On the west front of the castle is a more personal coat of arms, showing the arms of the 2nd Lord Forbes and his wife Mary Erskine, daughter of the Earl of Buchan. This was erected in 1663 to mark the completion of the 2nd Earl's expansion of the castle.

Pitsligo is an open site, and there is room to park along the verge quite easily. There is a short, level walk to the castle, and the path can be muddy after rain, so wear good footwear. When I visited, the castle ruins were quite obviously in need of repair, though it was equally obvious that quite a bit had already been done.

The ongoing work of the Pitsligo Castle Trust should make this an extremely enjoyable historical experience. If you look across the farm fields to the east of the castle you can see the ruins of another tower house, Pitullie Castle. 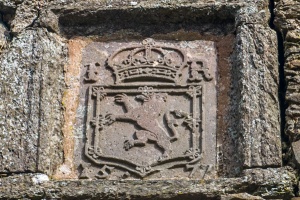 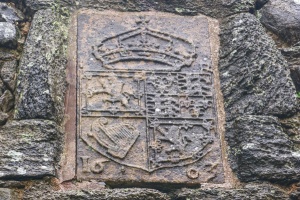 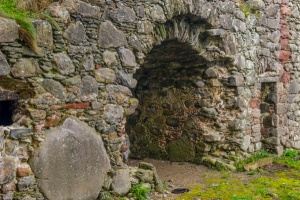 Inside the courtyard entrance 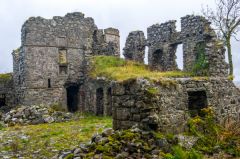 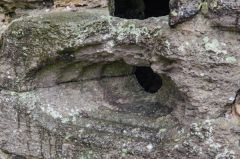 More self catering near Pitsligo Castle >>

A charming old fisherman's cottage based in Rosehearty, Scotland and can sleep two people in one bedroom.
Sleeps 4