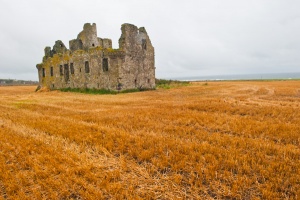 Pittulie Castle is a late 16th-century fortified house just outside Rosehearty, on the north Aberdeenshire coast. We don't know exactly when it was built, but it was likely erected in 1596 to celebrate the marriage of Alexander Fraser of Philorth to Margaret Abernethy of Saltoun.

From the Frasers the castle eventually passed to the Cumine family, who expanded the original tower. Sometime prior to 1791 it was acquired by Sir William Forbes, but it was finally abandoned around 1850 and left to moulder away.

The castle was built around a courtyard, like Pitsligo, another Fraser fortified house which can be seen over the field to the west. The ranges of buildings around the rectangular courtyard are 2 storeys high, with storage areas at the ground level and principle rooms above.

At the northwest corner is a 4 storey tower, which has oriel windows set in the angles on two sides. The laird's chamber would have been on the top floor of this tower.

Butting up against the northwest wall are remains of later buildings, probably utilitarian farm buildings. About 50 metres to the west stands a ruined dovecote, which may have been related to the castle; it certainly would make sense if it were. 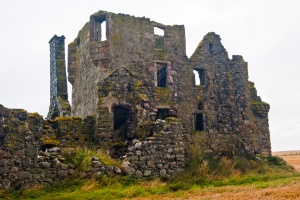 Over the tower door are two empty panels, now filled in. These would originally have held carved coats of arms, but the arms have ben removed and inserted into the exterior wall of the Mains of Pitullie farmhouse. They are well worth a look; the carving is extremely crisp and clear, and the workmanship is excellent.

Pittulie is one of the so-called 'Nine Castles of the Knuckle', a group of fortified tower houses in the Buchan area of north-east Aberdeenshire. Others in the group include Rattray, Lonmay, Inverallochy, Cairnbulg, Dundarg, and Pittulie's nearest neighbour, Pitsligo.

Today the castle stands in the middle of a farm field, west of the Mains of Pittulie. The ruins are clearly visible from the coast road and the minor road heading south to the Mains of Pitullie farmhouse.

There is no direct access to the castle without walking directly through the field, so that may mean that it is inaccessible at times of the year due to crops being planted. I was fortunate enough to come at a time when the crops had bee cut, so was able to walk straight across the field and explore the castle exterior.

You can't actually get inside the walls, which is perhaps just as well, for many of those walls look in poor condition, but you can really gain an appreciation of the wonderful stonework used in the castle construction. The stair turrets, in particular, have wonderful corbels, in the best tradition of Scottish tower house architecture. 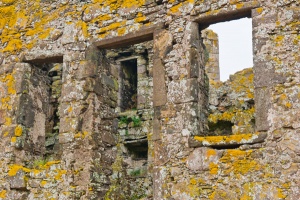 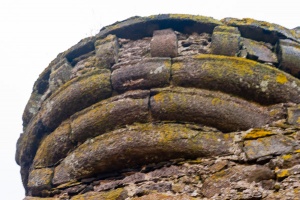 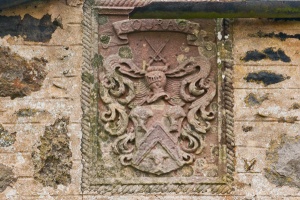 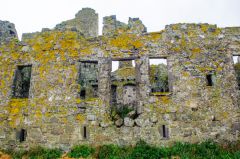 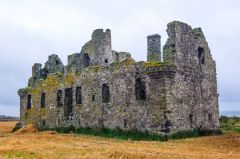 More self catering near Pittulie Castle

Self Catering near Rosehearty