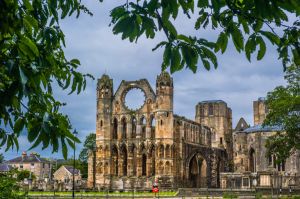 Elgin Cathedral
The cathedral city and royal burgh of Elgin stands astride the River Lossie, and for centuries has served as the main market for the Laigh of Moray region. The old town is laid out along a ridge above the river. At the west end of the ridge, a royal castle once stood, though the remains are now fragmentary, and they share the spotlight with a tall column commemorating the last Duke of Gordon (d. 1836).

At the other end of the ridge, joined to the castle precinct by High Street, are the remains of Elgin Cathedral, once known as the Lanthorn of the North, an almost perfect medieval cathedral. The cathedral was begun in 1224 on the site of the older church of Holy Trinity and was largely finished by 1300. The highlight is the choir, a symphony of early Gothic architectural style.

In 1390 the cathedral suffered at the hands of Alexander, Earl of Buchan, known to history as the Wolf of Badenoch. Buchan burned the city and the cathedral to the ground after he was excommunicated by a priest. The final indignity suffered by the cathedral came in 1567 when the Privy Council of Scotland decided to strip the lead from the cathedral roof in order to raise money to pay their troops.

Near the cathedral is the 16th-century Bishops Palace, which was almost certainly not an actual bishop's palace, but a precentor's manse. The cathedral's west front faces onto Cooper Park, where the Georgian townhouse of the Grants of Grant stands. Grant Lodge is just one example of the many fine Georgian houses that can still be seen in old Elgin.

On the High Street stands a reconstruction of the Muckle Cross, which incorporates bits of carving from the original medieval cross. On Abbey Street is the Church of the Greyfriars Monastery, a late 15th-century building (though with much late Victorian restoration work).

In Thunderton Place, off High Street, is Thunderton House, formerly a mansion owned by the Moray, Dunbar, and Duffus families. The house stands on the site of a medieval royal 'Great Lodging'.

About Elgin
Address: Elgin, Moray, Scotland
Attraction Type: Town
Location: At the junction of the A941 and the A96 6 miles south of Lossiemouth
Location map
OS: NJ205630
Photo Credit: David Ross and Britain Express

More self catering near Elgin >>

More bed and breakfasts near Elgin >> 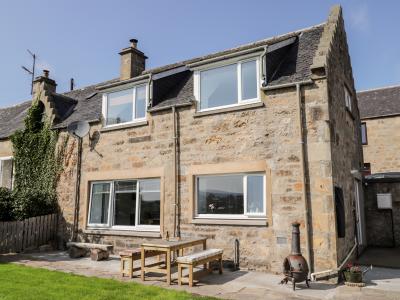