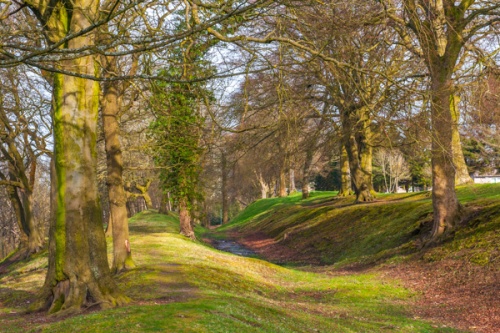 There are two sections of the Roman Antonine Wall here, one on either side of the private house known as Watling Lodge. The lodge itself is not open to visitors; the real interest here is the Roman remains in any case! The section to the east is one of the best-preserved ditch sections of the wall defences. At its greatest extent, the ditch is 12 metres wide by 4.5 metres deep.

The section of wall at Watling Lodge is the only place along the wall (aside from the regularly spaced forts) where a road passes through. The road was defended by a guard tower and double-gates. The road north crossed the Forth and led eventually to Ardoch, in Tayside.

The approach to Watling Lodge isn't very well signposted. More than once we had cause to thank our satnav! There is no obvious sign onto Tamforhill Road, and no brown tourist sign to show you when you've arrived at the Lodge. There is also no parking area. We parked on the access road to the industrial estate opposite, which wasn't ideal, but at least it got us off the main road.

Now, having said all that, the Wall itself at Watling Lodge is quite impressive. This was my first real exposure to the Antonine Wall, and the sheer scale of the earthwork banks and ditch was hugely impressive. Put any comparison to Hadrian's Wall out of your head; the Antonine Wall deserves to be appreciated for what it is, not for what it isn't!

You can walk a few hundred yards along the top of the wall, and there is a good information panel with an illustration showing how the Wall would have looked, and how Watling Lodge fit into the overall scheme of the defences. If you walk to the west side of the Lodge you get a completely different view, as the Wall follows the slope of the land down, to cross the modern roadway.

If you cross Tamforhill Road there is a signposted trail along the top of the Wall as it winds through woodland. This is a very attractive length of the Wall, but the ditch is somewhat overgrown, so it is more difficult to make out the defences. Overall, I was impressed by the stretch of the Antonine Wall at Watling Lodge; it gives a good idea of how the Wall was built, and just how impressive it must have been. 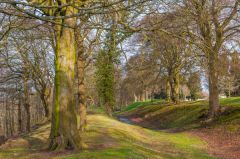 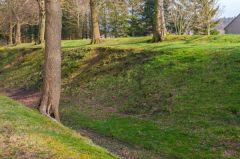 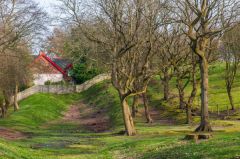 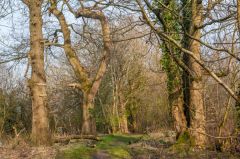