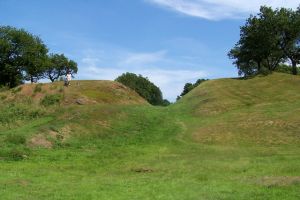 Antonine Wall, Rough Castle
Rough Castle is probably the best-preserved Roman site along the Antonine Wall. It is also one of the smallest of the 19 forts on the wall, with earthen banks fully six metres wide, enclosing an area of about 1.25 acres.

The 'castle' site has a section of ditch and earth rampart, in addition to earthworks used to create the fort defences. There is also a short section of a military road leading to quarry pits.

Rough Castle was built about 143 AD, and the remains of barracks, a headquarters building, the Commander's house, bath house and a granary were found during excavations on the site.

One interesting feature is a series of deep pits on the wall side. These pits, or lilias, had sharpened stakes at the bottom and were used to provide an extra layer of defence around the vulnerable entrance gate through the wall. The fort was the base for about 500 soldiers of the 6th Cohort.

About 3 miles away is Castlecary Roman Fort, another Roman encampment on the Antonine Wall.