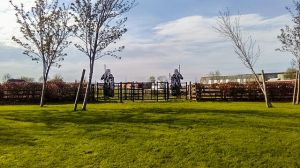 Antonine Wall, Castlecary Roman Fort
An earthwork marks the site of a Roman fort on the line of the Antonine Wall. The earthwork is located just south of the B816, east of its junction with the A80. Across the A80/M80, in the direction of the village, is the remains of a Roman camp.

The fort was probably built about AD 80, by troops under Gnaeus Julius Agricola. It was destroyed sometime in the 2nd century.

Castlecary Roman Fort is one of just two forts along the Antonine Wall to have stone ramparts (the others were built of earth). Remains include a section of stonework on the east rampart, fragmentary foundations of the headquarters building and part of the north gate.

Excavations on the site unearthed a well-preserved Roman altar and a statue of the goddess Fortuna. The altar is now on display at the Hunterian Museum in Glasgow.

You can reach the fort from Castlecary village. Take the minor road signposted to Walton and park in a cul-de-sac off Walton Road. The fort lies near a large clump of trees. The Glasgow to Edinburgh railway line cuts directly through the fort.

Nearby accommodation is calculated 'as the crow flies' from Antonine Wall, Castlecary Roman Fort. 'Nearest' may involve a long drive up and down glens or, if you are near the coast, may include a ferry ride! Please check the property map to make sure the location is right for you.