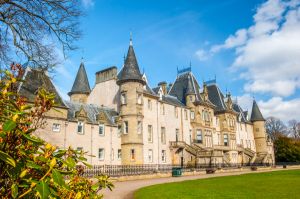 Callendar House is an imposing 600-year-old mansion. Mary, Queen of Scots, Bonnie Prince Charlie, and Oliver Cromwell all stayed here. The restored interiors house a museum of Falkirk heritage, with a magnificent oak panelled library, and a working Georgian kitchen. The Roman Antonine Wall runs directly in front of the house.

The house stands at the centre of Callendar Park, formed from the former house grounds. The park is one of the most popular recreation areas in the Falkirk area, with family amusements, playground areas, and trails through the parkland. Amid all this hustle and bustle the house and its long history itself seem almost forgotten. But what a history!

Excavations have revealed the remains of a 10th-century hall, probably built for the Thanes of Callendar, on Palace Hill in what is now Callendar Park. The hall was huge by the standards of the day, measuring 80 feet long and 30 feet wide, with a central hearth and areas of paving suggesting the wealth and status of the building's owners.

By the 14th century, the site of the old hall was abandoned, probably by the Livingston family, who now held the barony. The Livingstons built a fortified tower house of stone to the south-west of the hall. The tower house was built to withstand any threat, with walls 8 feet thick. The stone walls were made with lime mortar, reusing Neolithic oyster shells unearthed from a nearby shell midden.

The tower had just one room on each floor, with a storage area at ground level, and the main living area on the first floor, reached by an external stair. Above this was the baron's room, and soldiers inhabited the garret. Outside the tower was an enclosure with secondary buildings such as kitchens, stables, barracks, and storerooms.

The fortified residence was gradually extended over the next few centuries. Gun loops and pistol holes were added as artillery became more important, but by the 16th century the main entrance was moved to the ground floor, and an internal stair replaced an earlier turnpike stair.

By the 1560s Callendar House was grand enough to shelter Mary, Queen of Scots on a state visit. The queen is said to have stayed in the old laird's chamber on the second floor. 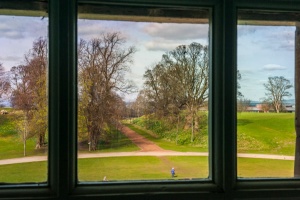 The Antonine Wall from a
second-floor window

The castle was held against Cromwell in 1651. The English army did not even try to take the house, and simply bypassed Callendar. However, when the garrison sent out raiding parties to harass Cromwell's armies, he decided he'd have to do something about it.

Cromwell prepared a siege of Callendar, and on 15 July 1651, his men stormed the defences, killing 62 men. Cromwell had the castle slighted so it could not be used for military purposes again.

In 1660 the Earl of Callendar restored the tower and incorporated the remains into a new mansion house. The Earl was influenced by Continental fashions and created a house unlike any that Scotland had seen before.

It was said that Callendar House had more glass in its facade than any house in the country. But more change was still to come; in 1783 the house was purchased by William Forbes, who added a two-storey wing punctuated with octagonal turrets, and a pair of stair towers on the front facade. The result was a superb example of Scottish Baronial style, like a medieval French chateau.

In 1962 Falkirk Burgh Council bought the estate, and converted part of the grounds into a public park while restoring the interiors to their grandiose best. The interiors feature a pair of ornate reception rooms (the Green Room and the Pink Room), but perhaps the most popular room open to visitors is the fully restored Georgian Kitchen.

There are several permanent exhibits, including a look at Falkirk at the time of William Forbes, and a special exhibit on the Antonine Wall. The Wall exhibit is apt, as you can clearly see the earthwork banks of the Wall from the upper windows of the house.

There is a gap in the Antonine Wall, directly lined up with the main house entrance. A myth of long standing says that the owner of Callendar House had the Antonine wall breached at this spot so that Queen Victoria would see (and be impressed by) the grand facade of the house when her carriage passed by on a state visit to Falkirk.

The story goes that at the precise moment when the queen's carriage passed the gap in the Wall, she turned her head ... the other way ... so that she completely missed the view prepared for her. Sadly for myth, it seems more likely that the gap in the Antonine Wall was there at least a century before the Queen's visit.

I was very impressed with Callendar House. The exterior is stunning, and the presence of the Antonine Wall running directly in front of the House really brings home the long history of the site. The interiors are not overwhelming, but enough remains to give an insight into just how impressive the House must have been in its heyday.

The best feature is the restored painted ceiling in the staircase hall. I also found the exhibits on Falkirk's heritage to be fascinating. There is a special display on Roman finds in the area and a collection of official weights and measures used locally. 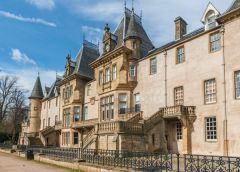 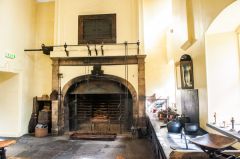 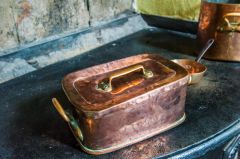 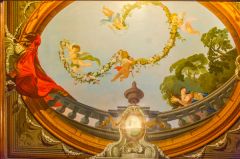 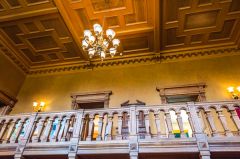 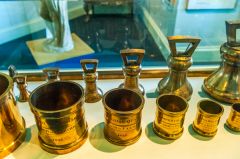 More self catering near Callendar House >>