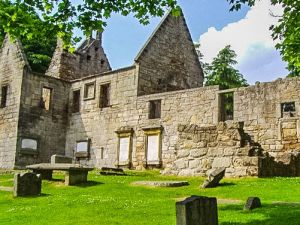 Dalgety, St Bridget's Kirk
St Bridget's Church at Dalgety is a ruinous 12th-century building on the edge of the cliffs looking over Dalgetty Bay. The church first enters the historical records in 1178 when it is mentioned in a papal bull, so it must have ben in existence for some time before that.

The church was later seized by Incholm Abbey and was finally consecrated in 1244. In 1644 the minister for St Bridgets was deposed for his refusal to go along with Charles II's attempts to reverse the trend towards Presbyterianism.

The minister, Rev Andrew Donaldson, refused to leave his parish, so Archbishop Sharp sent troops to oust him forcibly. The unfortunate Reverend Donaldson was summoned to appear before the Privy Council, declared an outlaw, and eventually thrown in prison for preaching without official leave.

When the political and religious climate changed once more the minister for St Bridgets was released from prison and reinstated in his office.

Note the small watch house built into the church wall. This was for the use of beadles, whose ostensible task was to keep watch for body-snatchers. However, local tales tell that unscrupulous beadles would sell fresh corpses to body-snatchers, who then sold them on to doctors for illegal medical research.

The church was used until the 19th century and in 1830 it was finally unroofed to prevent further use, and a new church was built further inland. Today, St Bridget's survives as an attractive ruin, with a laird's loft built for the Earl of Dunfermline, set above a burial vault.

Also within the ruins is an early medieval piscina, and there are numerous old gravestones in the churchyard. St Bridgets is in the care of Historic Scotland and is accessible at any reasonable time.