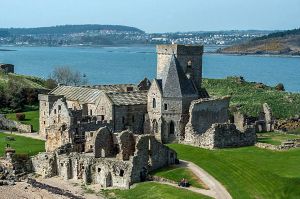 Inchcolm Abbey
When Alexander I was stormbound on Inchcolm Island in 1123 a hermit looked after his needs. In appreciation, Alexander founded an Augustinian abbey on the site. Well-preserved monastic buildings include the 13th-century octagonal chapter houses, 14th-century cloisters and parts of the abbey church.
History
History and myth blend together at Inchcolm, and it can be difficult to unravel the two. Tradition says that Alexander I (1107-1124) took shelter on Inchcolm Island when a storm made a crossing of the Firth impossible. The king took shelter in a hermit's cell and survived his ordeal. In gratitude for his salvation, the king founded a monastery for Augustinian monks on the island. It is more likely that the abbey was founded after Alexander's death in 1124 by his brother, David I.

The history of Inchcolm goes back much further in time, however. A hogback grave marker has been found dating to the 10th century, and we know there was a hermit mentioned here prior to the Norman period.

The Augustinian monastery began as a priory and was raised to full abbey status in 1235. The first church was later converted into a residence for the abbot. It survives, but the church that replaced it is now no more than foundation walls.

Inchcolm had a somewhat troubled history. It was attacked by Edward I of England during his 1296 invasion and remained a target for the English navy through the 16th century. The monks were regularly forced to leave Inchcolm to escape an attack.

The abbey fell out of use after the Reformation, but the remains are in extraordinarily good condition, perhaps because it was difficult to remove stones for other building projects due to the island location.

What to See
The abbey is often called the 'Iona of the East' due to its similarity with Iona Abbey, off the Isle of Mull. Like Iona, Inchcolm is an island site, but it never gained the same mystique as a sacred site. On the other hand, it never suffered at the hands of invaders to the same extent as Iona did, and Inchcolm remains the best-preserved group of monastic buildings in Scotland.

Remarkably, the cloisters, octagonal chapter house, refectory, and warming house are all complete. Most of the remaining monastic buildings are in exceptional condition. Oddly, the abbey church has suffered the most from the passage of time.

Perhaps the most interesting medieval feature is a 13t century wall painting discovered in a tomb recess. The painting shows a funeral procession in detail, perhaps the procession of whichever cleric was buried in the recess. Another medieval feature to survive is the stone screen separating the nave and choir.

The cloister is a remarkable survivor; three sides of the covered walk surrounding the cloister garth survive, more than any monastic site in Scotland.

During the Napoleonic Wars, a gun battery was installed to counter the threat of a French invasion. Then the island was put to use in WWI and WWII as part of 'Fortress Forth' when every island in the Forth was garrisoned as part of a plan to defend the Forth Rail Bridge and the navy base at Rosyth. You can explore wartime fortifications including a WWI ammunition tunnel across the eastern tip of the island.

What's in a Name?
Inchcolm translates as 'Columba's island', but there is no known link with Saint Columba.

Getting There
Several companies offer boat trips to Inchcolm from the Hawes Pier at South Queensferry. See the Historic Scotland website for current details. There is also a bus link from Waverley train station in Edinburgh.

More self catering near Inchcolm Abbey >>