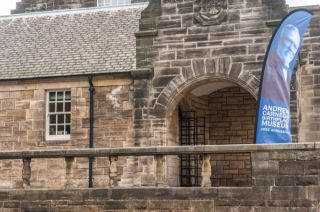 Andrew Carnegie Birthplace
The cottage where industrialist and philanthropist Andrew Carnegie was born is now a fascinating museum, arranged as a typical weaver's home. Near the cottage is Memorial Hall, housing exhibitions illustrating Carnegie's life and work.
A Birthday Surprise
On Andrew Carnegie's 60th birthday his wife Louise bought the small cottage in Dunfermline where he was born. The cottage was rented out to tenants, but in 1908 it was opened to the public as a museum. After Carnegie's death in 1919, Mrs Carnegie sponsored a Memorial Treasure House beside the cottage, to house a museum on her late husband's life. This was opened in 1928.

The museum holds over 5000 items relating to Carnegie, his life, and works. There are displays not only on the Carnegie family and young Andrew's life in Dunfermline, but also covering the linen industry in the early 19th century, and how people like the Carnegies lived. See artwork commissioned by the Carnegie family or given to them as gifts, including paintings, sculpture, prints, and a very large collection of presentation caskets given to Carnegie from as far afield as Italy, America, Holland and beyond.

There are science displays covering Carnegie's steel industries in the US, plus early photographic equipment, and pieces of early steel rail.

Step back in time to experience what life was like in early 19th century Dunfermline, and wonder at the courage of Andrew Carnegie, who emigrated to the US with only a few worldly possessions but became the richest man in the world.

Carnegie was a remarkable character, for he never forgot his humble roots in Dunfermline, nor his belief that his money could and should be put to use making the world a better place.

Andrew Carnegie has been called the Father of Modern Philanthropy. Among his many public works is the Carnegie Hall in New York, the Mount Wilson Observatory in California, and the Peace Palace in Den Hague, Netherlands.