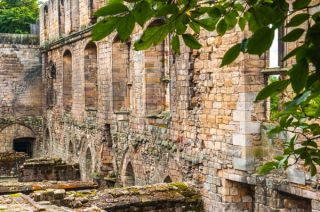 The ruins of a great Benedictine priory founded by Queen Margaret in the 1070's and elevated to abbey status by David I in 1128. Substantial remains of the church, domestic buildings and palace still stand. The western part of the building is the nave of the Abbey church, and the eastern end serves as the parish kirk.
History
The history of Dunfermline is very much the history of Scotland. Scottish rulers were carried to Dunfermline for burial long before Iona became the favoured burial ground of kings. Monarchs buried at Dunfermline include Malcolm Canmore, Queen Margaret and Robert the Bruce - a commemorative brass is found on the floor of the abbey.

In the 1070s Queen Margaret invited monks from Canterbury to establish a priory at Dunfermline. The new priory was the first Benedictine monastery in the country. David I enlarged the priory as a tribute to his mother and in 1128 it became an abbey. David also extended the church, which was consecrated in 1150. When Margaret was canonised a century later the church was enlarged again to include her shrine. Royal support meant that the monks of Dunfermline enjoyed relative prosperity and peace, at least they did until the English arrived. 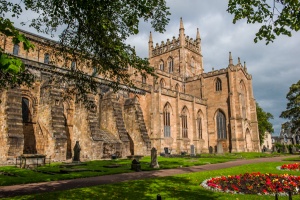 Dunfermline Abbey church
In 1303 English armies under Edward I occupied the abbey and overwintered here. Though the English left the church intact when they left in the spring, they destroyed the monk's domestic buildings. With the help of Robert the Bruce, the abbey was rebuilt, and King Robert himself was buried here. His tomb lies under the pulpit, covered by a late Victorian memorial brass. An inscription to Bruce is carved near the top of the tower, and a cast of Bruce's head is in a glass display case in the chancel.

Outside the east end of the abbey church is the site of Queen Margaret's shrine. The shrine was a major destination for pilgrims in the Middle Ages. Though much of the shrine was damaged at the Reformation, you can still see the stone base that supported Margaret's coffin and carved stones from the arches over the shrine. There is another memorial to a famous woman inside the churchyard; near the north entrance is a plaque commemorating the mother of William Wallace, who was buried here. 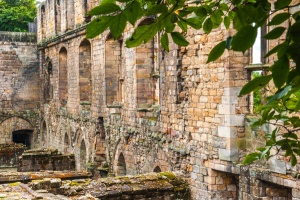 The royal palace ruins
The Palace
Adjacent to the Abbey are the ruins of a royal palace, begun as the abbey guesthouse. Because of the close links between Dunfermline Abbey and the Scottish crown, the guesthouse was luxuriously furnished and often served as a royal residence. After the Reformation, the guesthouse was completely rebuilt and given by James VI to his wife, Anne of Denmark.

By that time the abbey itself had ceased to function, swept away by the tide of changing religious sentiment. The most momentous event to take place in the palace was the birth of a son and heir in 1603; the future Charles I. After James VI became James I of England the royal connection with Dunfermline lessened, and the last royal to use the palace was Charles II in 1651.

The abbey church was saved from destruction because the chancel was put to use as the parish kirk, but the rest of the abbey buildings were robbed for building stone and allowed to decay. Yet despite the ravages of time, there are quite extensive and impressive remains, including a marvellous vaulted undercroft, with carved heads decorating the vaulting bosses. The walls of the refectory still stand to a great height, and you can see the kitchens and the impressive gatehouse. Look for medieval mason's marks on the stones; like a signature left by each mason.

The Old Church
The former nave of the abbey church, erected by David I over the original church founded by his mother, Queen Margaret. The Old Church is the only significant remain of the 1147 abbey, and is a wonderful example of Romanesque architecture, with huge, rounded pillars, two carved with striking zigzag patterns.

Visiting
Frankly, I was blown away! There is so much history wrapped up in the abbey ruins and the palace. The architecture of the abbey nave is simply stunning; it is one of the most impressive pieces of Norman architecture in Scotland. The nave arcades are simply amazing. The chancel is such a contrast to the empty, echoing nave; the grave of Robert the Bruce is striking, but it is rather oddly tucked under the pulpit, surrounded by Victorian woodwork, so it isn't the easiest thing to see closely. The cast of Bruce's skull, by contrast, is extremely easy to see; it is in a glass display case and much easier to get a good view of. Notice that he's missing his front teeth. A battle wound or simply old age?

As for the Palace and ruins of the abbey, I was very impressed. Enough detail has survived that you can imagine just how impressive it must have been at its height in the Middle Ages. There are displays of carved stones found on the site, and information panels describing the history of the abbey and how the different chambers were used.

If you have time, stroll into Pittencriieff Park and see the ruins of Malcolm Canmore's tower, where Malcolm and Queen Margaret stayed before the abbey was completed. There is a small cave, or oratory, where Margaret is said to have prayed, and another where William Wallace is traditionally said to have hidden from his English pursuers. 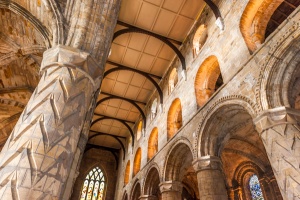 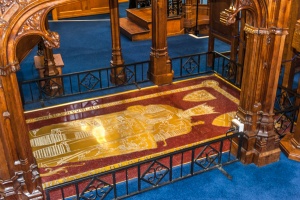 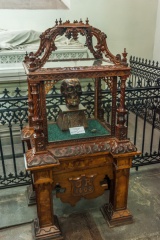 A cast of
Robert Bruce's skull 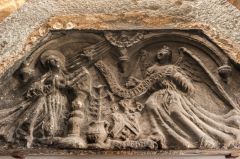 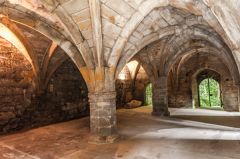 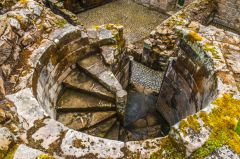 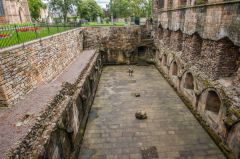 More self catering near Dunfermline Abbey and Palace >>

More bed and breakfasts near Dunfermline Abbey and Palace >>