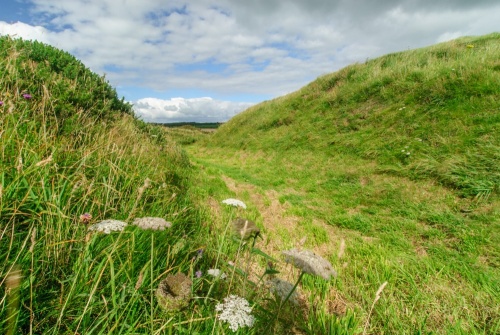 The earthworks of Barsalloch Fort

Barsalloch Fort is an Iron Age promontory fort looking south to the Isle of Man. The fort is defended on the landward side by a deep ditch between a pair of banks, and by the natural slope of the land on the seaward side.

The ditch encloses an area about 42 metres x 44 metres and is a roughly D-shaped space. The ditch itself is about 3.5 metres deep, up to 10 metres wide, with the banks adding another 1.1 metres to the defences. The entrance is not immediately apparent due to the effects of later farming but may have been at the north-east corner, on the lowest point of the headland.

The Barsalloch promontory was probably used as a simple farmstead and occupied by a local tribe known to the Romans as the Novantae. And that is about all we know of them; one single reference in Claudius Ptolemy's 'Geography', published in AD 150 in Alexandria.

The fact that the site was furnished with defences suggests that it was the home of a tribal chieftain. There is room for several round-houses within the enclosure, providing living quarters for an extended family unit.

There are few remains visible within the earthworks, and the real appeal of Bardsalloch is the wonderful location, with views to the Isle of Man and across to the coast of Northern Ireland. 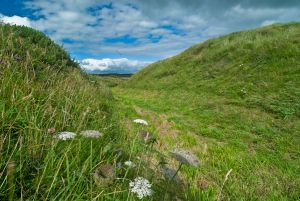 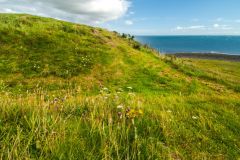 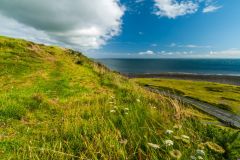 More self catering near Barsalloch Fort >>