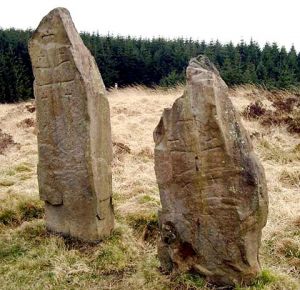 Laggangairn Standing Stones
At Laggangairn you can see two standing stones to which early Christian crosses were later added, set in a remote moorland location on the Southern Upland Way. The two stones are thought to be the only survivors of a circle of 14 stones, seven of which were still standing in 1873.

Each stone has an incised cross carved on its west face. These are Latin style crosses, ranging 2-3' high, with extended arms and crosslets in the angles of the arms. About 45' to the west is a small standing stone which is said to mark the grave of the farmer who took away some of the other stones.

A Victorian report suggested that two of the removed stones are thought to have been used as gateposts at Pultadie and two others suffered the same fate at Kilgallioch.

Laggangairn is one of the more difficult historic sites to get to; a stiff five miles walk along the Southern Upland Way from New Luce provides the easiest access.