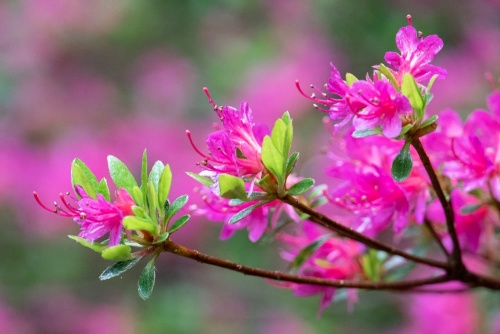 A fascinating historic garden laid out on a narrow isthmus between two lochs, Castle Kennedy Gardens is based around the romantic ruin of an authentic 14th-century stone castle. The remarkable micro-climate of the area, favoured by water on three sides and the moderating influence of the Gulf Stream, means that many exotic plants can grow and flourish here.

The gardens date to at least the 17th century, when Sir James Dalrymple of Stair married into a Wigtownshire family. Sir James' son, Field Marshall Dalrymple, was appointed the ambassador to the French court, and during his time in France he was inspired by the formal gardens so popular at that time. It is said that the original layout of the green at Castle Kennedy is based on the formal gardens at the Palace of Versailles.

In 1716, when the Field Marshall was due to return from his diplomatic posting in France, the staff at Castle Kennedy decided to air out his bedding. During the airing out process, the castle somehow caught fire, and the medieval castle keep was destroyed. That did not stop the Field Marshall from developing his formal gardens around the ruin of the castle, however, but subsequent generations of the family allowed them to fall into disuse. 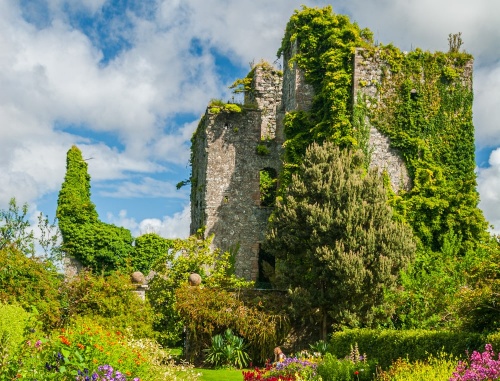 However, hope was at hand; in 1867 a new stately home, Lochinch Castle, was built near the original castle site, and this has been the home of the Earls and Countesses of Stair ever since. In the period following the construction of Lochinch Castle, the gardens were renewed, and a wide array of exotic plants were brought here from all across the world.

Though there is no access to Lochinch Castle, the house is clearly visible from numerous viewpoints in the garden. 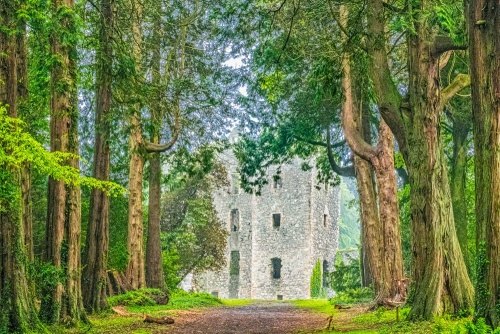 The Thuja Avenue and castle ruin

Today the gardens are home to sweeping lawns and tree-lined avenues, wide, sweeping vistas, and quiet oases of colour. The core of the garden is still the walled garden area around the old castle keep, half covered in ivy, but there is also a sunken garden, pond garden, rhododendrons, azaleas, a lily pond, canal, other water features, and a range of conifers.

Another garden feature is a series of long, grassy avenues. Some, like the Monkey Puzzle Avenue and the Noble Fir Avenue, were planted over 150 years ago and originally featued a single species of treee. In the northern part of the garden is a large pond where rare varities of Victorian water lilies thrive. 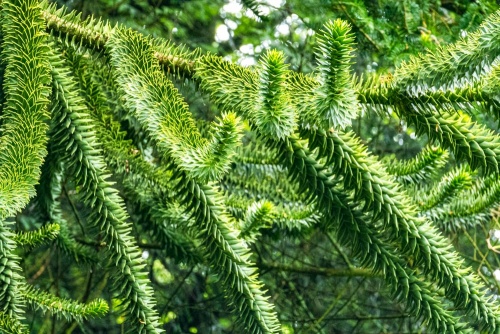 Throughout the gardenn are what the official leaflet calls 'sculptured landforms'; carefully designed patterns of earthen banks and curves laid out in the 19th century to mould the grounds into a picturesuque canvas of shapes and colours. Among these is the Nine of Diamonds, a sculptured bank in the shape of diamonmds, reflecting the Stair family coat of arms. The Nine of Diamonds was created in the early 18th century.

Leading from the Nine of Diamonds to the ruins of the castle keep is the Thuja Avenue, a wide patrh that leads your eye inexorably up a gentle slope, framing the castle ruins under a tunnel of green boughs. 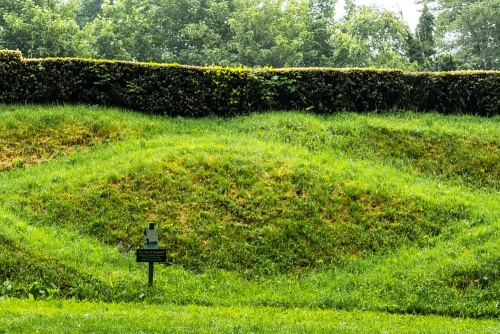 Speaking of trees, Castle Kennedy Gardens is home to 20 Champion Trees, among them the tallest rhododendron in Britain at over 16m high.

This is a wonderful garden, with plenty of open space, quiet walks, and lots of horticultural and historical interest.

Castle Kennedy Gardens are well signposted off the A75 east of Stranraer. Just look for the brown tourist signs. There is a large, gravelled parking area, an information centre, toilets, shop, and a popular cafe. 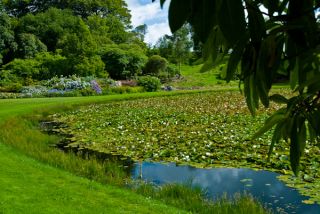