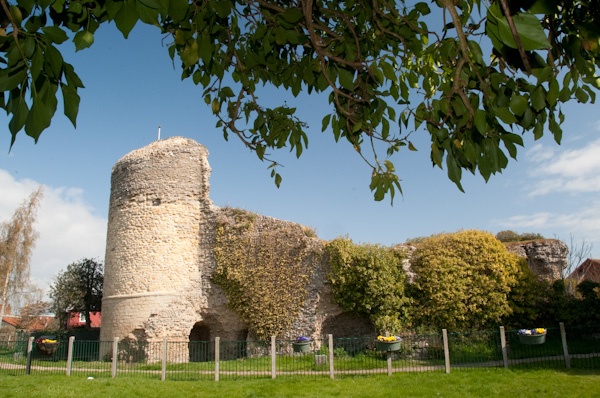 One castle, a priory, a Roman well, a Saxon tower, a museum, a redundant medieval church, and a 17th-century Butter Cross - there's a lot to see and enjoy in the historic north Suffolk town of Bungay, a fact recognised by English Heritage, who have designated the town centre as a Conservation Area.

Bungay sits on the south bank of the River Waveney, barely within the Suffolk border with Norfolk. The origin of the town name is lost in history, but it may have referred to 'Bunincga-haye', or an enclosed settlement of Bonna's tribe, Bonna being a local Saxon chief.

A major Roman road ran close to the town, and nearby Wainford was an important military camp. The Saxons made better use of the location, and a large Saxon cemetery in the area of Joyce Road indicates that there was a sizeable settlement here at least as early as the 7th century.

After the Norman Conquest, the existing Saxon estates were granted to William de Noyers. It was likely de Noyers who built the first castle at Bungay to protect himself from hostile Saxon natives.

That first castle was replaced by a much stronger stone castle around 1164 under the powerful Hugh Bigod, Earl of Suffolk. The obstreperous Hugh was given to frequent rebellions against the crown. His new castle at Bungay was an affirmation of his wealth and independence, a thumbing of his proud nose at the English crown.

The castle, whose impressive ruins stand just off the market place, had walls 16-22 feet thick and stood over 70 feet high - higher than the tower of St Mary's church. Henry II ordered the castle destroyed, but Hugh bought him off. A 13th century descendent built the twin towers that front the castle enclosure, and are the castle's most impressive feature.

We've mentioned St Mary's church. This impressive and spacious medieval building stands beside the Market Place. It was built in the 12th century to serve a small Benedictine priory, the ruins of which can still be seen in the churchyard to the east.

An old story says that in 1577 St Mary's received a visit from the infamous Black Dog of Bungay (the Devil in disguise). The Black Dog must have made quite an impression on the terrified parishioners, as he is commemorated on the town crest.

A little further east brings you to Bungay's oldest building, Holy Trinity church. This delightful little church has a distinctive round tower that dates to the late Saxon period. If you look closely at the south doorway you will notice that the stones are discoloured from the effects of a disastrous fire that swept the town in 1688. The fire was stopped at the church door, a fact recalled by a memorial plaque in the church porch.

The fire did destroy the old medieval market place, but the rebuilding of that busy area in the centre of town gave Bungay perhaps its most elegant historical building, a delightful Butter Cross, built in classical style. A weekly market has been held here since 1382.

The Butter Cross once housed a prison with a dungeon. This was later replaced by an iron cage for containing miscreants. The area around the Butter Cross is full of interesting old buildings, despite the ravages of the 17th-century fire.

Off Borough Well Lane is Borough Well, a source of water since Roman times. The well itself is a Tudor construction. On Bridge Street (number 34) the French politician and writer Chateaubriand took refuge when he fled France in 1797 during the French Revolution.

There is a very nice town trail leaflet available locally, which has details on all the places mentioned here. Our family has visited Bungay several times and really enjoyed exploring all the historic sites. 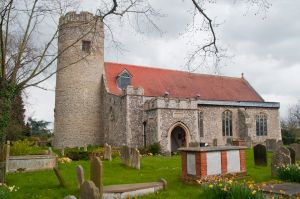 More self catering near Bungay >>

More bed and breakfasts near Bungay >>