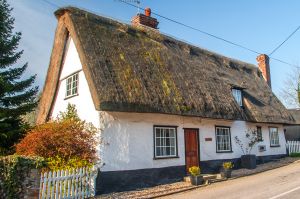 There's a lot of historical interest in the little Suffolk village of Dalham. The village lies in a lovely rural area of western Suffolk, close to the Cambridgeshire border, on the east bank of the River Kennet. The village is full of attractive traditional cottages, many of them thatched in Norfolk reed or straw.

At the heart of the village is a thatched pub known as the Affleck Arms, named after a 19th-century lord of the manor, Lieutenant General Sir James Affleck (1759 - 1833). Sir James is buried in the churchyard of St Mary's church, which dates to the 14th century but is built on the site of a Saxon church mentioned in the Domesday Book.

Within the church are medieval wall paintings, part of a 15th-century rood screen, and interesting monuments to the Stuteville and Affleck families of Dalham Hall. A later owner of Dalham Hall was Cecil Rhodes, the African entrepreneur, who died before he could take up residence.

The village is known for two other historic buildings; one is easy to spot, for it stands high on the hill to the west of the river. This is a large smock mill, called Lower Dalham Mill or Opposition Mill, built in the 1790s and in operation until 1926.

The name 'Opposition Mill' is a peculiar one, which may refer to the fact that it was a competitor to another nearby mill, or that its sails turned the opposite direction to its rival. The octagonal mill is 50' high and originally had four 27' long sails, now long gone.

The other major building of historic interest is an early Victorian malting kiln, built of red brick in a beehive style. Malting kilns were once a common sight in Suffolk, the most famous example being the Snape Maltings near Aldeburgh. The kiln was perhaps built as early as the 1820s and remained in use until the 1870s.

There are also a set of three early 20th-century almshouses, now administered by a charitable trust to offer accommodation to local people.

You can take several attractive walks around Dalham and along the River Kennet. Perhaps the most interesting walk is the Three Churches Walk, which links Dalham with Gazeley and Moulton, following the long-distance Icknield Way in places.

The village has a very useful website at http://dalham.com/

More self catering near Dalham >>

More bed and breakfasts near Dalham >>