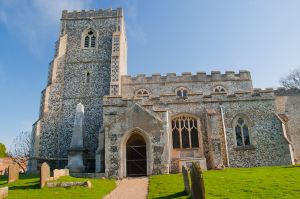 Dalham is an idyllic rural village on the Suffolk border with Cambridgeshire, between Bury St Edmunds and Newmarket. The medieval parish church of St Mary's stands in atop a hillside overlooking the wooded valley of the River Kennet, and close to the manor house.

Dalham Hall was home to the Stuteville family from 1416-1702, when they sold it to the Bishop of Ely, and in time it passed to the Rhodes family. Cecil Rhodes, of African fame, was the brother to the lord of the manor here.

The church dates to the 14th century, but it stands on the site of a much earlier Saxon building mentioned in the Domesday Book. The nave and chancel are essentially unchanged from their 14th-century construction, and these are augmented by a 15th century north aisle and a 17th century rebuilt tower.

The first thing you notice on entering the church are the series of medieval wall paintings on the north wall of the nave arcade and over the chancel arch. One unusual feature of the Dalham paintings is that they represent secular rather than religious themes, though the distinction may not be so obvious to modern visitors.

The themes on the nave wall are the Seven Mercies (Seven Works of Mercy) and the Seven Deadly Sins, while the much more worn painting above the chancel arch is thought to be part of a larger Doom.

The church also contains the base of a 15th-century rood screen and an east window by the famed Kempe studio, but the other main feature that really draws your attention is the tomb of Sir Thomas Stuteville (d. 1571). Sir Thomas, lord of Dalham, has had his tomb inserted into a 15th-century tomb chest of one of his forebears.

Another Stuteville is well remembered; Martin Stuteville's 1631 wall memorial is deliciously Jacobean, with a proud bust of the nobleman rising above his two wives, while kneeling offspring are aligned below their sire. Sir Martin did not stint to remember his own good deeds either; look above the tower arch and you will find a huge tablet telling the world that Stuteville was responsible for having the medieval tower rebuilt.

Other features inside the church include tombs of the Affleck family, and some rather attractive carved bench ends, notably that of an armless squirrel.

Dalham's church is a delight to visit, in a village that seems wonderfully lost in time.

About Dalham, St Mary's Church
Address: Church Lane, Dalham, Suffolk, England, CB8 8TB
Attraction Type: Historic Church
Location: Off Church Lane, beside Dalham Hall, on the northern edge of the village. Though the drive to the Hall is private, there is a parking area for church access at the end of the drive.
Location map
Dalham, St Mary's Church Photos
OS: TL724626
Photo Credit: David Ross and Britain Express