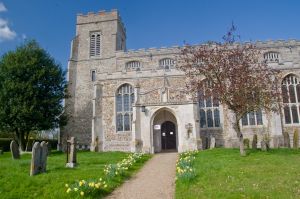 A wonderful example of a late Perpendicular Suffolk church, St Nicholas is built on the site of a 12th-century church, but the core of the current building is almost entirely late 15th century, with a 14th century west tower.

The church contains a wealth of interesting historic features, including a series of beautifully carved bench ends, a set of medieval misericords, and a magnificently carved wall plate frieze running the entire length of the church on both sides.

One of the things that makes St Nicholas' so satisfying to visit is that most of the church (with the exception of the tower) was built in a short period of time and has been altered very little since.

In 1475 the church became a chantry when a license was granted to Sir John Howard and John Broughton to establish a college with a warden and a pair of priests. The chantry college lasted until 1548 when it fell foul of the Reformation, at which time the warden and priests inhabited a mansion beside the church.

After the college was suppressed St Nicholas' carried on as a parish church, but the parish was too poor to entertain any substantial restoration, for which we should be grateful, as much of the late medieval woodwork that makes the church so enjoyable has remained largely untouched.

Denston possesses one of only 13 Seven Sacrament fonts in Suffolk. The Denston example is neither the best nor the worst of these, with some very nice carving detail and only a modicum of wear.

More interesting are the carved bench decorations. These take the shape of a number of fanciful animal figures, including, most famously, an elephant, carved by a craftsman who had almost certainly never seen such a beast in person.

The Denston elephant has a bit of a horse about it, and a bit of ... well ... it's rather hard to say, but it is unique, to say the least. In addition to the elephant, there are figures of hounds, hares, lions, and other peculiar beasts.

As interesting as these medieval carvings undoubtedly are, it is the carved wall plate that catches your eye when you enter the church. This narrow wooden strip runs the length of the nave and chancel on both sides and is decorated with lively carved animal figures in relief, including hares, lions, dogs, stags, bears, and a variety of odd man-beasts.

At the east end of the church are a series of table tombs, including a rather startling memorial to John and Katherine Denston, with the couple lying in their death shrouds, looking extremely grim. There are further memorials to the Robinson family of Denston Hall and fragmentary memorial brasses.

Denston's church is memorable and very enjoyable to visit.