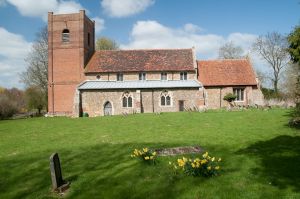 Cowlinge is one of the largest parishes in west Suffolk, tucked up against the Cambridgeshire border north of Haverhill. The church of St Margaret of Antioch lies beside the old estate of Branches Park, now vanished, home of the Usborne and Dickins families. Members of both families are buried at Cowlinge (pronounced 'Coolinje').

This attractive country church is mostly a product of the 14th century. The clerestory above the nave is 15th century, but the red brick west tower was built in the 18th century to replace an earlier tower which had collapsed. The tower dates to 1733 and was built by Francis Dickins (Dickens) of Branches Park, a fact which is commemorated by a plaque in the gallery at the west end of the nave.

One of the most fascinating features at Cowlinge is the graffiti which is inscribed into various pillars. On one of the south-east nave pillars is a rare and unusual depiction in the shape of a Viking style ship. The ship is quite crudely drawn but can be identified as a northern European carrack, of a style that suggests a carving date of the mid 13th century.

There are numerous Latin inscriptions on the nave pillars. One is a bit of poetry in an elegiac couplet (a combination of hexameter and pentameter) which translates as

Whensoever you go by me
Whether man, woman, or boy you be,
Bear in mind you do not fail
To say in passing 'Mary Hail'.

Other graffiti includes a pair of feet, single hands with pointing fingers, severed heads, and a peculiar seahorse. There are so many pieces of graffiti that one might call Cowlinge church a medieval graffiti gallery. It does take some determination to make out some of the graffiti and to separate the medieval art from some inevitable modern copycat scratchings, but there are good signs and the printed church guide is quite helpful.

There are also two 14th-century consecration crosses, on the eastern responds of each nave arcades.

One of the most interesting interior features is a carved wooden rood screen, dated to about 1400. The screen retains its original gates and hinges, something that can only be said of one other screen in Suffolk (Lavenham being the other). There is also a smaller parclose screen in the south aisle, of a slightly later date.

There are not one but two squints, one on each side of the chancel arch, and fragmentary traces of a large medieval wall painting of the Last Judgement. There is an octagonal font dated to the 14th century and a hatchment to Henry Usborne of Branches Park (d. 1823). Another resident of Branches Park, Frances Dickens (d. 1840) is remembered by a large marble monument.

One final interesting historic feature is a set of old benches at the west end of the north aisle. According to an inscription above the benches dated 1618, these were provided for inmates of a local house of correction. This was not a prison as we understand it today. Under a 1609 law, houses of correction were established for 'Lew'd women who have bastards, rogues, vagabonds, and sturdy beggars'.

Constables in each parish were required to round up said miscreants and bring them before the local magistrate, who would commit them to a house of correction. Local tradition suggests that the Cowlinge House of Correction was near the church, opposite one of the entrances to Branches Park.

More self catering near Cowlinge, St Margaret of Antioch Church >>