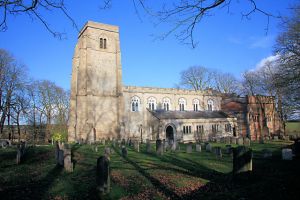 Kirtling, All Saints Church
In the 11th century the manor of Kirtling was owned by King Harold, and the parish church of All Saints bears clear signs of Saxon construction incorporated in a later Norman design.

The church stands beside Kirtling Castle, a manor house on the site of a 13th-century fortification. Before that, the site was occupied by a Saxon house owned by King Harold. The lovely 16th-century gatehouse is all that remains of an  Elizabethan manor that was the home of the North family, whose fine monuments are the highlight of the interior.

The building we see today is largely Norman, with numerous 12th-century features, including a very nicely carved 12th century south doorway. The doorway moulding is decorated with traditional Norman motifs, with zigzag and chevrons. The tympanum is carved with a delightful figure of Christ in Majesty seated on a rainbow. Not only the doorway, but the actual wooden door is Norman, though it has been rehung.

The nave wall and south arcade are also Norman, while the aisles, chapel, chancel, and west tower are 15th century Perpendicular. Vestiges of medieval painting can be seen in the north transept chapel and the chancel.

Also in the chancel is a fascinating memorial brass to a merchant named Edward Myrfin (d. 1553). The brass tells us that Myrfin travelled across Europe to Greece, and Turkey, through Syria, and the Holy Land, before returning to England to die at the age of only 27.

The interior is memorable for the numerous hatchments and memorials, mostly to the North family. This is possibly the best collection in the county. The majority of the memorials are in the North memorial chapel, which, despite the name, was not built by the Norths, but was taken over by them to be used as a family chapel in the mid-16th century.

The first North to be commemorated here was Sir Edward North, who served as Chancellor of the Court of Augmentations under Henry VIII. North made his money handling the dispersal of former monastic property seized by the crown in the Dissolution of the Monasteries. Though he was accused of financial irregularities, he was able to wriggle out of the charges and ended up with a fortune, which he used in part to buy Kirtling manor.

Next to Sir Edward's tomb is that of his son Roger, who served Elizabeth I as a privy councillor. Sir Roger's tomb is ornate to the point of absurdity, but is all the more interesting for it! The effigy of the deceased lies under an ornamented canopy, and he has at his feet a griffon, a type of hunting dog. The pillars supporting the canopy are magnificently carved in an intricate pattern of foliage.

The church stands well apart from the village. It seems likely that the village was originally grouped around the church, but when the Black Death of 1348 devastated the village, the houses were moved about a mile away. The plague burial ground in the churchyard has remained intentionally untouched since the 14th century.

More self catering near Kirtling, All Saints Church >>

More bed and breakfasts near Kirtling, All Saints Church >>