HERITAGE HIGHLIGHTS:   Wooden coat of arms to James I 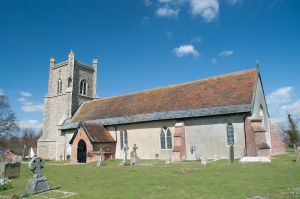 The church at Friston dates to the Norman period and probably stands on the site of a Saxon church with links to the priory at Snape. It is built to a parish church typical plan, with a nave, chancel, west tower, and south porch, though the nave and chancel are combined under one roof and rather run together, with no arch and only a step up to mark the transition from nave to chancel.

The main body of the church is 14th and 15th century, but as you enter the south porch you will find a burial slab and a 13th-century coffin lid, and across the nave you will see a blocked Norman doorway which may be 11th century.

Spare a glance at the font; the bowl is Victorian but rests on a base which may be the original medieval font turned upside down. On the north wall is a coat of arms of James I, dated 1605. But unlike most churches, the Friston arms are not painted, but beautifully carved in wood to which some original paint still adheres.

The carved wooden pulpit is also Jacobean, but much older by far is the east window on the south wall, which dates to the 13th century and retains some of its original medieval glass.

Hanging on the wall is an intriguing relic; the much-worn binding of a Tudor Bible, written about 1550. The Bible was found stored in the old parish chest, where it had lain forgotten for many years. It is likely the first Bible ever used in Friston church.

In the churchyard are numerous graves of Bowater family members, three of whom served as Lord Mayors of London.

St Mary's is a simple church, a quiet, unassuming country church, but possessed of undeniable charm. The highlight for me is unquestionably the carved coat of arms.

Take a moment after you've finished exploring the church to visit the historic Georgian windmill just a short distance east along Mill Road. The mill dates to 1812 and is the tallest turret post mill in England. 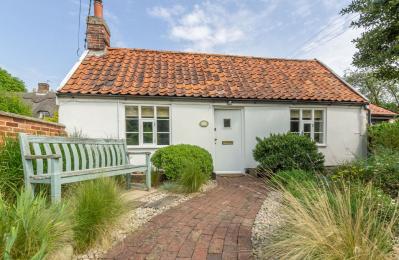 Myrtle Cottage is a perfect mix of period features, contemporary fittings and stylish furniture in a traditional Suffolk cottage. It is an ideal location for a romantic getaway or a …
Sleeps 4