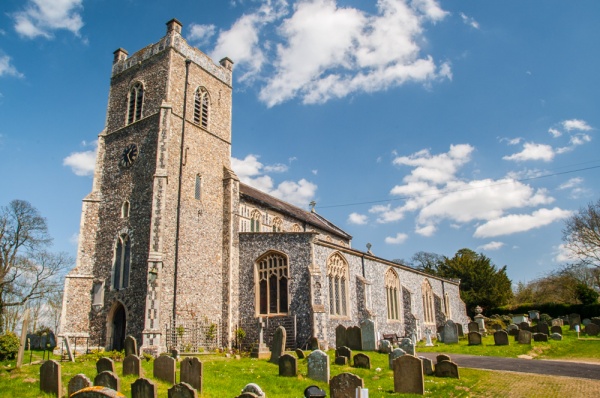 The Domesday Book of 1086 recorded three churches in Saxmundham. Of these, St John the Baptist was certainly one, though the other two churches may not have been in Saxmundham at all, but in the associated 'berewicks', or outlying estates, of Peasenhall and Knodishall.

Little remains of the early Norman church on this site except for stonework at the base of the tower, and the earliest part of the present church dates to around 1250. Much of the 13th-century building was swept away in a comprehensive rebuilding in 1873. The tower holds a ring of six bells, the three oldest of which were cast between 1480-1510 by John Kebyll of London.

One of the highlights is a wonderfully carved 14th-century font. Around the base of the font are figures of the Suffolk woodwose, or wild man of the woods, shown carrying his club. Note that some woodwoses carry their clubs aloft and some have their clubs lowered. Symbolically the raised clubs represent unrepentant sinners, and those with lowered clubs depict those who have repented. The font bowl is in typical East Anglian style, with figures of angels holding shields alternating with lions. 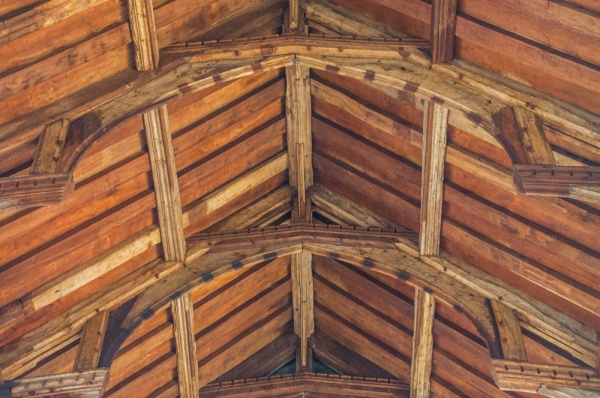 The nave roof is a beautiful example of late medieval hammer-beam construction. The roof was hidden beneath layers of plaster for centuries and only came to light when the plaster had to be removed in 1932 to deal with the destruction wrought by a deathwatch beetle infestation.

In the chancel are memorials to members of the Long family, including one by Joseph Nollekens (1737–1823) to Charles Long, who died in 1812, and one by Richard Westmacott (1775–1856) to Rt. Hon. Sir Charles Long. Sir Charles is not actually buried here but at Wormley in Hertfordshire. The Long family lived at nearby Hurts Hall, a short distance south of the church.

The credence table in the sanctuary incorporates part of the original medieval rood screen, its original painting scheme intact. 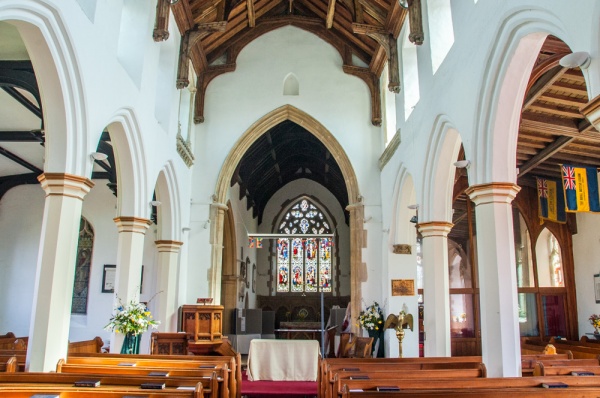 Like many medieval churches the chancel 'weeps', that is, it is built at a distinct angle to the nave. This is traditionally sad to represent Christ leaning his head on the cross to speak to the penitent thief. What is rare, almost unique, about Saxmundham's chancel is that it 'leans' to the left, looking from the altar, rather than the right. Only one other Christian church is known to have this peculiarity, and that is in France.

Off the chancel is The Swan Chapel, built in1308 by Robert Swan, lord of the manor, as a family chantry. The chantry was destroyed at the Reformation and the chapel was later converted into a war memorial to those who died in the two world wars.

The floor is paved with stones brought from the church of St John in Fitzroy Square, London, which was destroyed in WWII bombing. On the north chapel wall is a tablet to Beeston Long (1765) and his wife, Sarah, carved by William Tyler, a founding member of the Royal Academy. Another memorial is to George Long, who died in 1782 in the assault on Trincomalee in Sri Lanka.

The west window of the ringing chamber in the tower holds the only original medieval glass in the church, a panel depicting the head of an angel. The rest of the glass is Victorian, o varying quality, but one highlight is the west window of the south aisle, designed by the Marchioness of Waterford, a friend of author John Ruskin. The glass was made by O'Connor and Taylor and depicts Christ's ascent into heaven. The detail is exceptional, particularly the expressions of the faces of Christ's disciples.

One rarity is a sundial cut into the gravestone of John Noller (d.1725) in the churchyard. This sundial, cut directly into the stone of the tomb, is thought to be unique. The gravestone is aligned east to west, so the sculptor cut a morning dial on the east face and an afternoon dial on the west face. 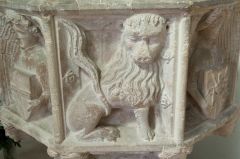 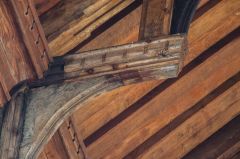 More self catering near Saxmundham, St John the Baptist Church

Self Catering near Saxmundham