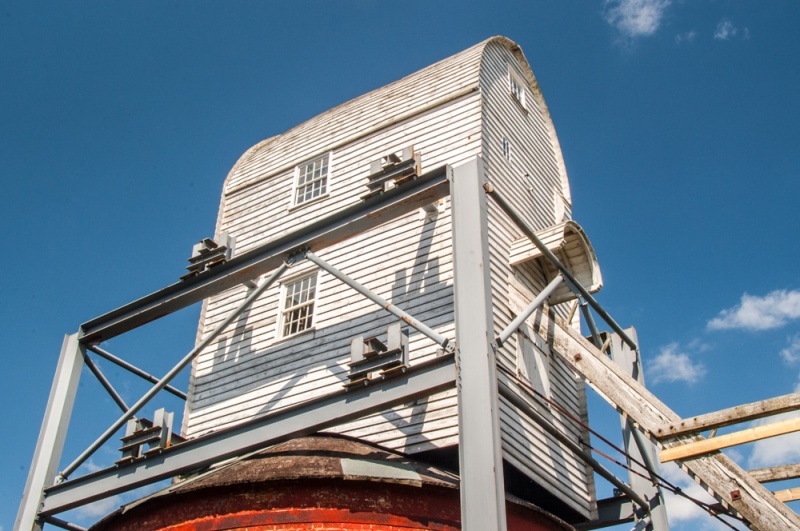 Friston Windmill is the tallest surviving post mill in England, standing 50 feet (15.24 metres) high. It is also the third-highest post mill ever built in Britain, behind the demolished mills at Thorndon and Honington, both in Suffolk. It was built in 1812 to a turret post design, with a roundhouse of red brick at the base.

The base has three iron hoops around it to strengthen the structure, two near the top and one just above the entrance. There is a ground-level entrance and a second loading door at first-floor height.

Power came from four anticlockwise sails driving three sets of grinding wheels, two in the head and a third in the tail. The tail stones were powered by an underdrive tail-wheel. The mill later had a fourth pair of stones driven by a portable steam generator. In addition to the four main sails there was a six-bladed fantail mounted on a wheeled tailpole. The pole end is intact, but unfortunately, the huge fantail itself is gone. 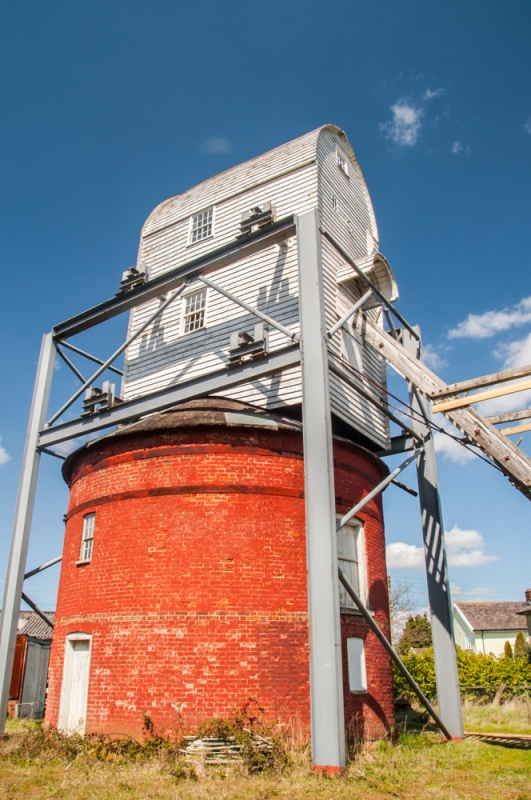 The mill buck and roundhouse

Above the roundhouses rises a weatherboarded 'buck', or mill body. The rear gable has a curious window above the porch roof, designed in Gothic style.

The mill was made for serious production, employing three millers and grinding 1 ton of grain per hour.

We do not know exactly when the mill was made, but we know when it was put into production. In 1811 William Scarlett bought the land on which the mill stands, and he sold it again the following year. The bill of sale describes the land as 'upon which a post windmill hath lately been erected'.

The mill structure is thought to have been built in the millyard of Joseph Collins, a millwright working on Woodhouse Road, Ipswich. Joseph Collings, a Bramfield millwright, bought the structure from Colins and almost immediately sold it on. The mill was sold 4 times in just ten years before it was purchased by Charles Gildersleeves of Aldborough, who held it for 15 years before selling it to Joshua Reynolds (no relation to the artist of the same name). 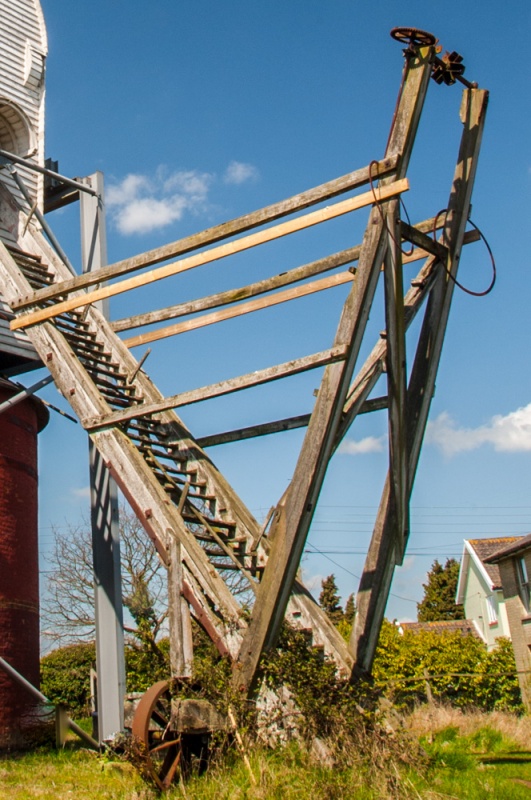 The wheeled tail pole, minus its fantail

The height was raised in 1874, but the biggest change came in 1875 when a severe storm destroyed two of the four sails. Two sails were permanently removed in 1943 and not replaced because of a wartime shortage of timber. The mill ran for 13 years on just two sails, and for another 8 years on a diesel engine. It finally went out of production in 1964. By this time it was in very poor condition, and permission was granted to tear the mill down in 1965.

Local residents banded together and repaired the mill, but it was sold in 1971 and the mill stones were removed shortly after. The new mill owner is committed to restoring the mill to full working order and has received funding from English Heritage towards that goal. As part of the restoration process, a large steel frame has been built around the mill to stabilise the structure. You can see the frame in the photos accompanying this article.

The exterior of the mill is easily viewed from the entrance to the mill yard on Mill Road, near the church.

I actually came to Friston to visit St Mary's church and view its Tudor Bible. To get to the church I had to drive directly past the mill. There were no signs to give any background on its history, but I just had to stop and investigate. The unusual shape of the mill, with its striking red roundhouse makes it an unforgettable sight. Certainly, the editors of Meccano Magazine thought so, for they featured a photo of Friston Windmill on the cover of their magazine in August 1942. 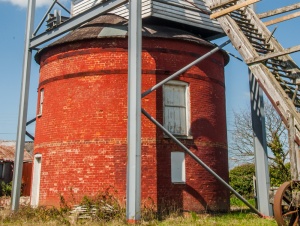 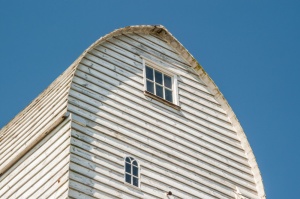 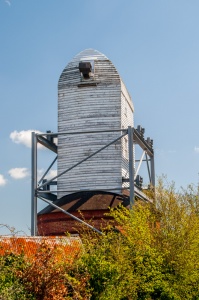 The rear of the mill 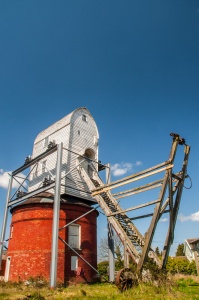 Another look at the
mill and tail pole

More self catering near Friston Windmill

Self Catering near Friston