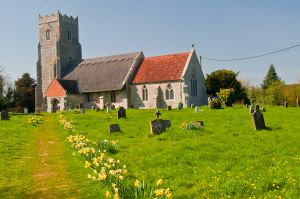 The church of St Botolph at Iken is a Suffolk landmark. sited on a low spit of land jutting out into the estuary of the River Alde. The church is mainly 15th century, but the site itself is much, much older. Parts of the nave may date to the 12th century, but even that is a relative newcomer to this ancient site.

Sometime in the mid-7th century, a Christian monk by the name of Botwulf requested a grant of land from the local king of what is now eastern Suffolk. Botwulf asked for a 'waste and ownerless place' on which to found a monastic cell. According to the Anglo-Saxon Chronicle, in AD 654 'Botwulf began to build the minster at Icanho'. Botwulf is known to history as St Botolph, and his monastery, or minster, was one of the first in East Anglia.

The site of the new minster was not an auspicious one; as Botulph requested, he was given a bleak and marshy area, a far from hospitable place. A Christian community grew up around Botolph's minster, and when Botolph died near Burgh around 680 AD the monks buried him at Iken (an alternate version of the story says that he was buried at Burgh)

Two centuries later the Suffolk coast suffered under waves of Viking raids. Over the winter of AD 869-70 the Vikings destroyed many monasteries in Suffolk, among the Iken. Eventually, the saint's relics were removed from Iken for safekeeping and ended up at Bury St Edmunds.

A new church was built upon the ruins of the Saxon monastery and dedicated to St Botolph.

And there the story might have ended but for a chance discovery; in 1977 the county archaeologist, Stanley West, found a large Saxon cross embedded in the tower of the medieval church. On examination, the cross was found to be richly decorated with Anglo-Saxon interlace designs and the likeness of a mythical beast.

The cross dates to the late 9th century and may have been set up as a memorial to mark the site of Botolph's grave. The cross is now on display at the west end of the church, near the font. It is about 1.5 metres long, roughly half of its original height.

If you fancy a bit of exercise, an unforgettable way to visit Iken is to take the footpath along the river from Snape Maltings. You won't be alone if you take the walk; Iken church is still a popular destination for modern pilgrims, flocking to the birthplace of Suffolk Christianity.

St Botolph's is a lovely little church, and the Saxon cross is a beautiful monument, but the real attraction at Iken is the location, where a sense of history seems to linger on the air; the scent of age and Anglian heritage.