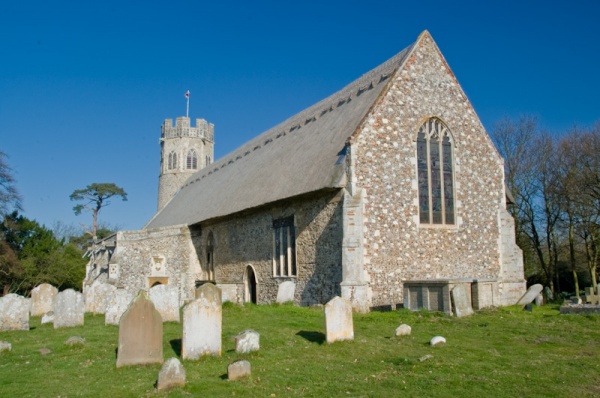 On the morning of 17 June 1917 the German Zeppelin airship L48 was shot down over the village of Theberton, Suffolk. Only three crew members survived, and one of these died of his injuries shortly afterwards. A memorial to the 17 dead was erected in the cemetery across the road from the medieval church of St Peter. The crew were initially buried there, but later exhumed and reburied at the German war cemetery on Cannock Chase, in Staffordshire. A plaque on the site reads:

A section of the airship's metal frame was mounted in a display case and is on view in the church porch, beside an account of the crash in both English and German, and a description of an excavation of the crash site.

As for the church itself, it began in the Norman period, with a nave and integral chancel under a thatched roof, and round west tower. It was enlarged in the 13th century when an octagonal belfry was added atop the round tower base. The striking south porch, decorated with exceptional flushwork, was added in the 15th century. The church was rebuilt in 1848 by the Doughty family of Theberton Hall, and there are memorial to the Doughty's throughout the church. 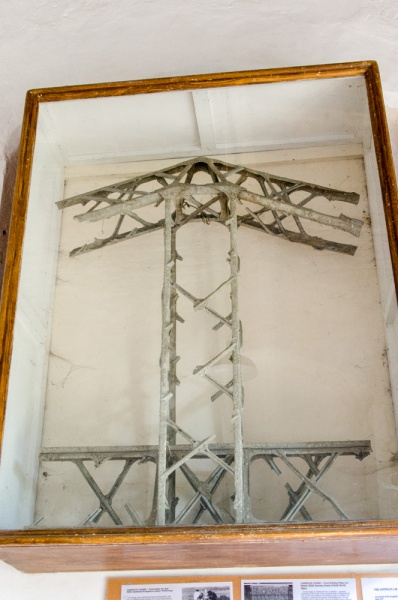 A section of Zeppelin L48

The font is 15th century, and in typical East Anglian style the octagonal bowl is carved with Biblical symbols interspersed with lions and angels. The stem is supported by carved figures of lions alternating with woodwoses, a wild man of the woods figure usually portrayed carrying a club. The font base has a step made from a medieval coffin lid.

In the vestry is an interesting display commemorating the links between Theberton and the village of the same name in South Australia, founded by Colonel William Light, who grew up in Theberton.

High in the north wall is an unusual Norman arch, carved with roll moulding. There doesn't appear to be any old opening in the wall, so it is thought that the arch was part of a 12th-century doorway, inserted in the wall for preservation.

The north aisle is separated from the nave by a three-bay arcade, painted in extraordinarily vivid colours. The painting is Victorian, but it helps imagine what the original medieval church might have looked like. 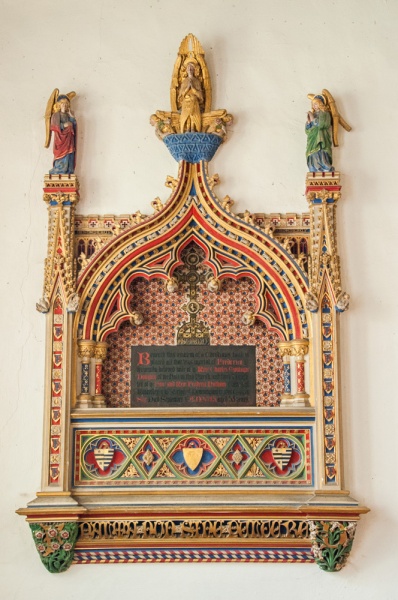 On the chancel wall is a memorial to Thomas Ingham and his wife, and nearby are memorials to members of the Wootton and Milner Gibson families. On the south wall is a three-seat sedilia, or clergy seat, beside a medieval piscina. Opposite in the north wall is an aumbry cupboard, remarkably retaining its original medieval wooden door and iron hinges.

The colourful east window glass is by the well-known Victorian firm of Ward & Hughes, installed around 1884. The stained glass window on the south wall of the nave commemorates Lt. Col. Doughty-Willis, who was killed in the Gallipoli assault in 1916, and awarded a posthumous Victoria Cross. On the west wall is an exceptionally ornate memorial to Sir Charles Doughty, under a gilded ogee arch decorated with pinnacles.

The nave benches are Victorian, but there are several medieval benches in the chancel, sporting very nice poppyhead ends. 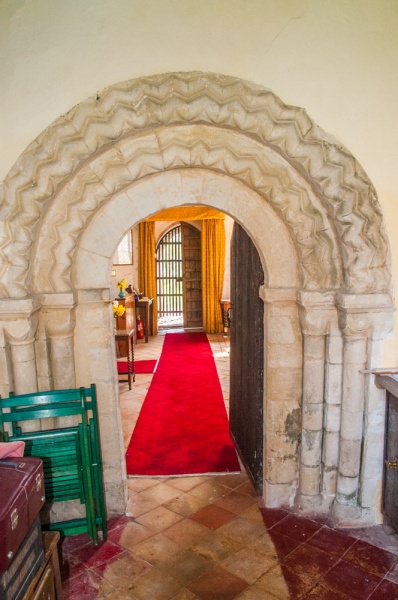 A Norman doorway in the vestry

One of the most interesting features inside the church will not be immediately obvious. If the vestry door is unlocked, as it was when we visited, walk through, then turn around to see a remarkably good example of a Norman doorway, with three orders of moulding decorated with chevron carvings, flanked by pillars with cushion capitals.

The church is usually open daylight hours to visitors. I say 'usually' because the first time we tried to visit the door was locked. The next time, however, the door was indeed open as advertised, and we were able to explore and enjoy this wonderful historic building. 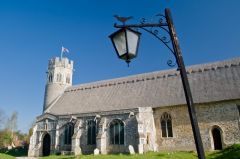 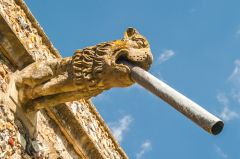 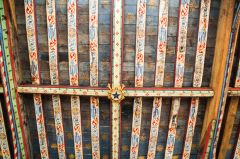 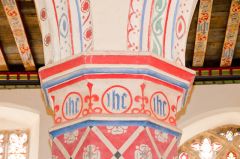 Self Catering near Theberton