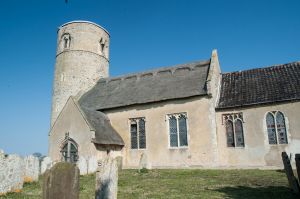 The church of St Margaret's seems lost, as if deserted by its village and left to its own devices. The church stands beside the B1074, looking out over the River Waveney, just on the Suffolk side of the border with Norfolk. It would be easy to drive past, but the church presents such a delightful picture, with its perfect round tower and thatched nave.

The church is built to a very simple plan, with an aisless nave, chancel, and round west tower. The nave is thatched, but the chancel is tile-roofed. The most interesting historic features here are Norman; the 12th-century doorway leading into the nave has distinctive Norman chevron and dogtooth moulding, and the tower has round-headed lancets on the upper storey.

The interior boasts a wonderful collection of stained glass covering a huge range from the 14th to the 18th century. Some of the glass is continental, brought here from Cologne. There are several wall monuments to members of the Leathes family, especially that of John Leathes (d. 1787).

Herringfleet dates to before the Norman Conquest. It was among the estates granted to Roger Bigod by William the Conqueror. The manor later passed to Roger fitz Osbert, who founded an Augustinian priory at nearby St Olaves in 1216. St Margaret's church at Herringfleet was one of the churches granted to St Olaves to provide funds for the canons.

The church is only occasionally open (it wasn't the last time I visited!).