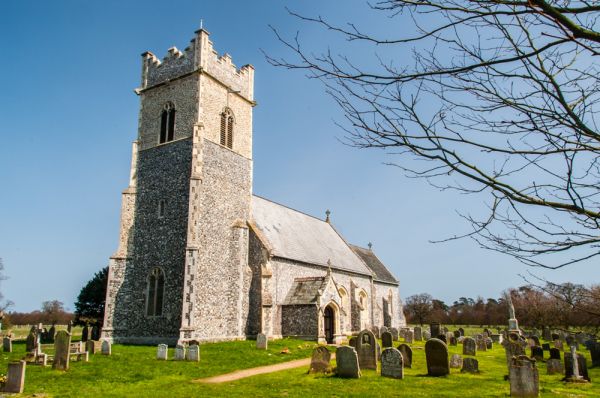 St Mary's church stands a mile away from the village it serves, in the grounds of Somerleyton Hall. The church was built in the 15th century and comprehensively remodelled in 1854 by Samuel Morton Peto.

Peto used architect John Thomas of London, the same man who had designed the extraordinary mansion of Somerleyton Hall just a few years earlier. Thomas found the church almost derelict, but he managed to salvage the chancel and tower. He had to completely rebuild the nave, however, but to his credit, it all fits together very well, and the medieval merges effortlessly with the Victorian.

Thankfully the Victorian restoration left many of the church's historic treasures intact. Chief among those treasures is a 15th-century screen, remarkably preserved and one of the best examples of a medieval screen in Suffolk. The base is divided into panels, with tracery arches housing 16 painted figures of saints, including English saints Edmund, Edward the Confessor, and Thomas of Canterbury. On the north and south extremes of the screen are likenesses of St George and St Michael killing dragons. 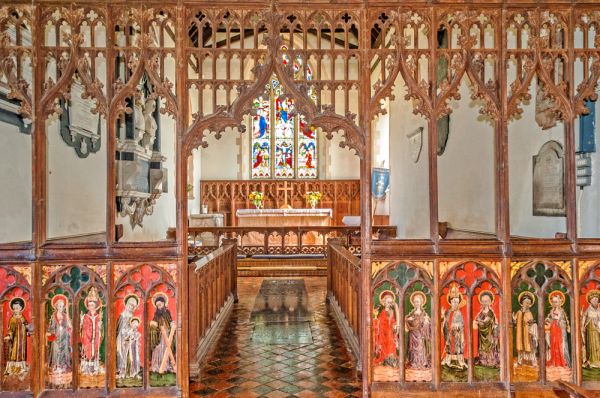 The top of the screen is a magnificent example of medieval woodwork, with finely carved trefoil arches that resemble lace more than wood.

Over the south door is a medieval stone slab from a pre-Reformation reredos. The slab was discovered under the church floor during the Victorian restoration, presumably hidden there to prevent it being destroyed during the religious turmoil of the Reformation. It is divided into four panels depicting symbols of the Evangelists.

The 15th-century octagonal font also survived the 1854 restoration. The font is typical of East Anglian style, with an octagonal bowl carved with alternating figures of angels holding shields and lions. The font stem is supported with four more figures of lions and the font is topped by a 17th-century wooden cover.

Two north nave windows contain 14th-century Flemish glass, brought here from St Olave's Priory. Also on the north wall is a memorial window to Frank Crossley, Second Baron and Lord of the Manor. Opposite in the south nave wall are three windows given by the Somerleyton family. 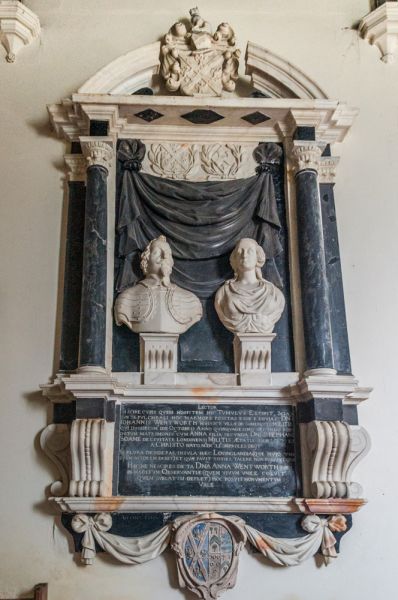 In the chancel is a wonderfully carved monument to John and Anna Wentworth, dated 1651. Busts of the couple are displayed in front of a black marble backdrop carved like drapery, and above their heads are three family coats of arms. The sculptor had to take great care with the decoration, as the monument was carved at the height of Cromwell's Commonwealth when overtly religious messages were risky if not outright dangerous.

Near the Wentworth memorial is a rather more sedate monument to Sir Thomas Allen (or Allin), Admiral under Charles II who died in 1686. The fascinating epitaph tells us that:

Near this place lies interred Sir Thomas Allin, Bart., Whose unshaken Fidelity to His Sovereign Charles ye Second Was rewarded with many Marks of His Royal Favor. Having had the Honour of serving Him, As Admiral in His Fleets, In the British & Mediterranean Seas, Controller of the Navy, Capt. of Sandgate Castle, And Master of the Trinity House. He died in 1686, in ye 73rd Year of His Age.

Also in the chancel is a memorial to General Sir Henry Percival de Bathe, who had the unusual distinction of serving as a page at Queen Victoria's coronation and again serving in an official capacity at her funeral.

Bathe's private life was a Victorian soap opera. He fell in love with Charlotte Clare, but his father objected to a marriage. The couple began living together, and had seven children before Bathe's father died and they could get married.

It was not until the Legitimacy Act of 1926 was passed that four of the illegitimate children could successfully apply to be declared legitimate, which of course entitled them to inherit. Despite this, Hugo de Bathe, the Bathe's first son born in wedlock, was heir to the baronetcy over his older brother. The Bathes are not buried at Somerleyton, but in West Stoke, near Chichester.

In the corner of the chancel is a tomb chest to Sir Thomas Gernegan (1446), decorated with quatrefoil panels containing shields.

There is a ring of six bells in the tower. The oldest three date to the 15th century and were cast in Norwich.

The church is usually open from spring through autumn. You can access it directly, off the B1074, or, like us, if you are visiting the Hall you can simply enjoy a lovely walk across the fields from the Hall parking area. 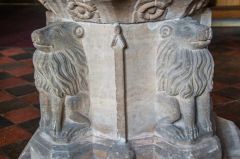 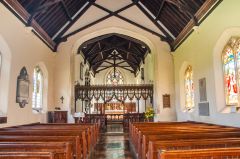 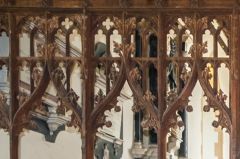 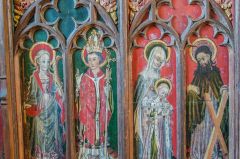 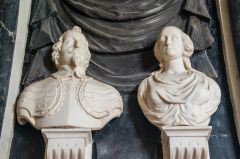 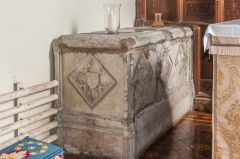