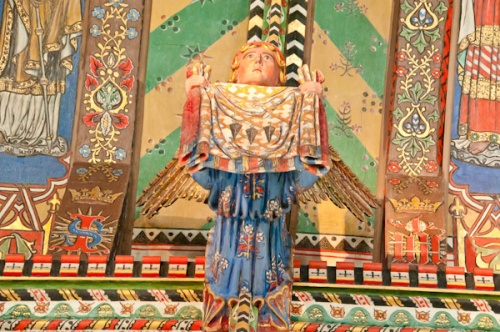 The parish church of St Mary the Virgin at Huntingfield is a gem, a treat for the senses. Though the building dates to the Norman period, it is a recent addition that makes Huntingfield such a rewarding place to visit; an exquisitely ornate, painted angel roof, the work of the wife of a Victorian rector, who spent some 23 years creating an extraordinary work of art.

Let's get the history out of the way before jumping ahead to the Victorian art. There has probably been a church here at Huntingfield since the 11th century, or perhaps even a century earlier. This earlier date is supported by the finding of a 10th century Saxon coffin and standing cross here just after the turn of the 20th century.

The stone fragments of the cross and coffin are set in the church wall. Much of the current church is 15th century, though it incorporates earlier work, including a 13th/14th-century chancel.

There are also fragments of medieval stained glass in the east window if the south aisle, and a wonderful grave slab to Martha Shute (d. 1705), with a carving of her shrouded body standing atop a skull. 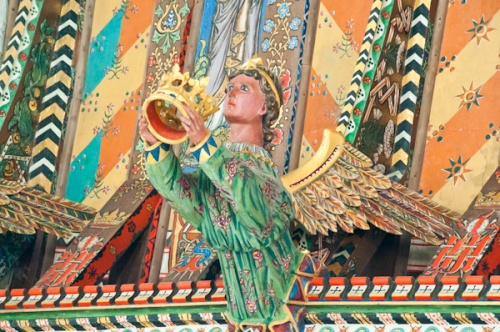 An angel bearing a crown

That's the historical bits and bobs dealt with, so let's get on to the real reason to visit Huntingfield; the astonishing painted roof. The person responsible for this work of art on a massive scale was Mildred Holland, wife of William Holland, who served as rector of Huntingfield from 1848-1892.

Over the years 1859-66 Mrs Holland painstakingly painted the entire 15th-century hammerbeam roof, angels and all, in an extraordinarily colourful fashion.

It is hard to adequately describe the painting scheme, so I suggest you examine the photos accompanying this article. Mrs Holland had no assistance with the painting, which must have been fantastically difficult, not to mention expensive.

One source (The Shell Guide to Suffolk) suggests that the Holland's spent £2000 on the church roof; an exceptional sum for the time. I don't know what it did to their family finances, but if you see the result today you'd say the money was well spent. The Holland's tomb lies beside the church path, and as you pass by, pause to say a silent 'thank you'; it really is that good.

Is it authentic? Appropriate? Well, I'll leave that for someone else to debate. I loved it, and I'm not one always given to appreciating Victorian art. The Huntingfield roof is quite simply extraordinary; a must-see. 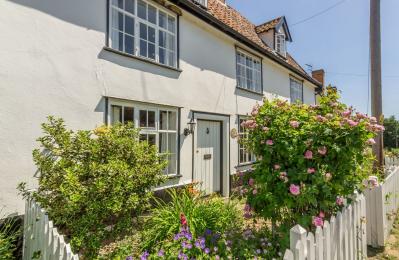 This Grade II, 17th century mid-terrace property is situated in the quiet Suffolk village of Huntingfield. Nearby places to visit include Framlingham with its impressive castle and the beautiful resort …
Sleeps 5