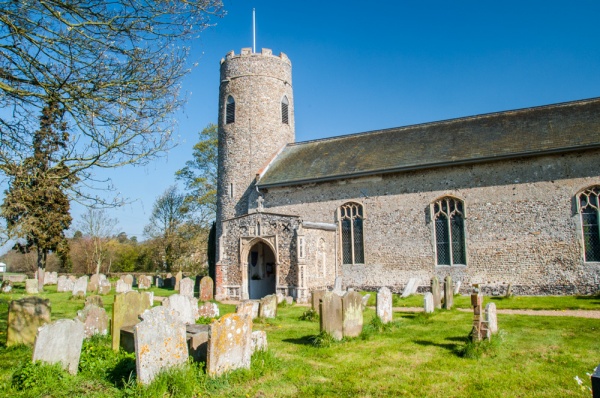 Wissett is a small village a few miles outside Halesworth, in northern Suffolk. The Domesday Book records a church at nearby Rumburgh, serving Rumburgh's Benedictine priory, and a chapel serving the village of Wissett itself. The only features to survive from that chapel are the tower arch and two Norman doorways into the nave

The church is made of flint and dates to the 11th century, with a round 12th-century west tower, making St Andrew's one of 41 round-tower churches in Suffolk. The tower floor is 12th century, making it the oldest tower floor in the UK.

The round tower is a wonderful example of Norman architecture and was probably built in the middle of the 12th century at the same time as the church nave. Some historians take issue with the dating and consider that the small roundheaded windows in the tower wall are late Saxon. 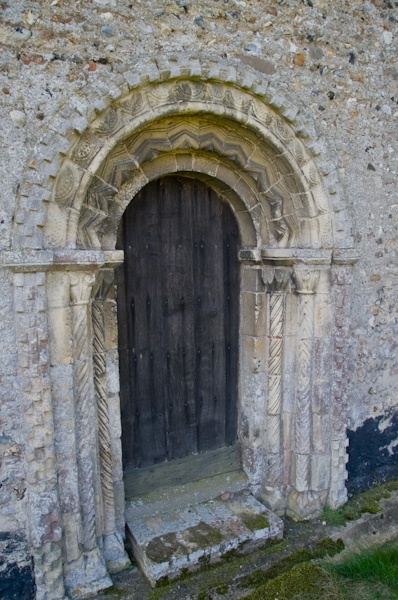 An archaeological survey of the church unearthed an ancient leather shoe in the belfry. The shoe is thought to be that of a woman or adolescent, and date to the 16th century. It was very likely not lost, but intentionally placed behind the bell-frame to bring good luck. Thee is a common folk tradition in many parts of Britain that putting an object, like a shoe, in a floor or wall cavity will bring luck or repel evil.

The south door is a wonderful example of Norman craftsmanship. The doorway has a dozen grotesque heads carved into the archway. There are also two scratch dials in the doorway.

Around the far side of the church is the blocked north doorway, which is even more elaborately carved.

At the west end of the nave is the 15th-century octagonal font, crafted in typical East Anglian style, with carvings of angels alternating with symbols of the Evangelists around the bowl, and the stem carved with figures of lions alternating with woodwoses. The woodwose is a 'wild man of the woods' figure common to Norfolk and Suffolk. 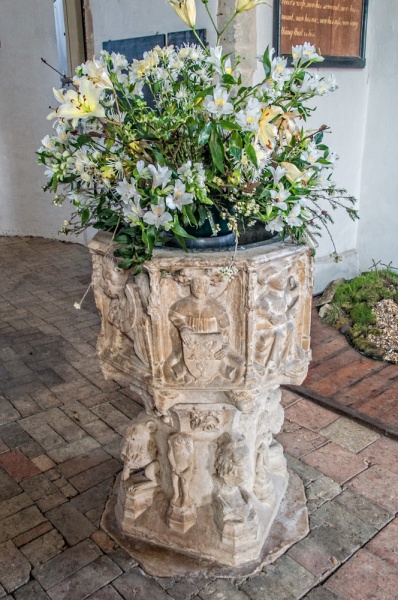 The pulpit is Jacobean, and near it, you can see remains of the medieval rood stair. The most interesting memorial in the church is a wonderfully preserved brass inscription to Elizabeth Blomfield, who died in 1638 at the age of just 19. The brass is set into a black ledger slab in the floor.

On the wall is a royal coat of arms to George III, dated 1813, when his son, Prince George, was acting as Regent. Tucked against a wall is a worn parish chest. It doesn't bear a date but from the style, I'd suggest it is 17th century.

The pews are mostly Victorian, but some old poppyhead bench ends have been grafted onto the 19th-century benches. All of the nave windows contain fragments of medieval glass, but the large east window is filled with colourful 19th-century glass.

St Andrew's is a lovely church in a very pretty village. It is usually open daily to visitors and was open when we visited. 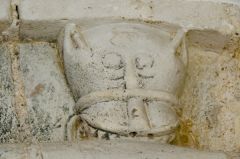 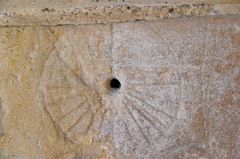 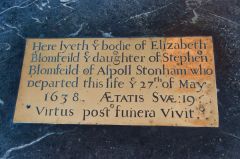 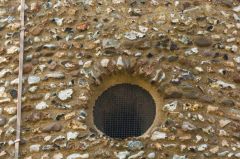