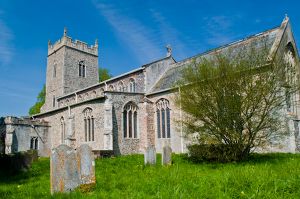 Cratfield is a quiet country church, the last place you'd expect to find a historic treasure - but that's what exploring English country churches is all about, isn't it? Opening the door of a medieval country church is like opening the lid of a treasure chest; you just never know what you might find inside. Here at Cratfield what you find is a superb 15th-century Seven Sacrament font, one of the finest in England.

There are similar fonts scattered about East Anglia, but it would be hard to find one where the carving is so beautifully and skillfully executed. The font is not perfect - two of the panels have had their carvings defaced, presumably during the Reformation. But the other six faces of the font bowl remain to impress visitors.

As with other such fonts, the panels follow a standard theme; separately depicting the Crucifixion, Baptism, Confirmation, Mass (destroyed), Confession (destroyed), Ordination, Marriage, and the Last Rites. As beautiful as the bowl is, it is the richly carved stem that catches my eye; with figures beneath canopied niches and another set of seated figures at the base of the stem.

Several of the panels retain traces of paint, giving a tantalising glimpse of what the font might originally have looked like when it was new. The font seems almost perfectly proportioned, with the bowl spreading out above the slender base. Wow!

There is more to St Mary the Virgin than just the font, of course. The oldest part of the building is 14th century, with a 15th century west tower. Above the tower entrance door beautifully carved figures of a dragon and a wildman, or woodwose, decorate the spandrels.

Within the church are 20 Jacobean pews with poppyhead ends. A section of a 15th-century screen stands against the west wall of the nave, near several grave slabs, two with brass inscriptions. The best-preserved memorial, however, is an 18th century one to Sarah Mynne (d. 1724) in the north aisle.

This tomb seems to be set over a niche which may be a medieval aumbry cupboard. There is also a nicely decorated medieval piscina in the sanctuary, and a Jacobean pulpit with very well carved ornamental panels.

More self catering near Cratfield, St Mary the Virgin Church >>