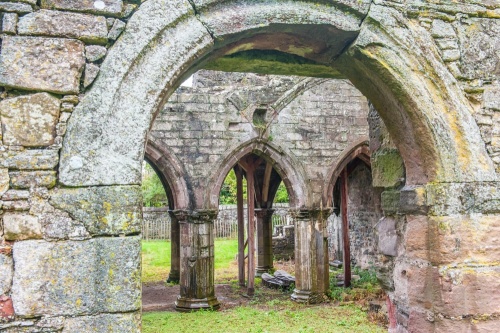 We are not certain what the meaning of Balmerino is; at first glance, it seems oddly Italian. It is possible that the name derives from 'bal', meaning town, and Merinach, a Celtic saint thought to have visited the region.

We are on firmer historical ground when it comes to the foundation of the abbey, for we know that it was established under the patronage of Queen Ermengarde, wife of King William the Lion, in 1229.

The site chosen for the abbey may appear a quiet backwater today, but in the early 13th century it lay on an important crossing of the River Tay on the pilgrimage route between Arbroath and St Andrews. The abbey was founded as a daughter house of Melrose Abbey, the first Cistercian monastery in Scotland. Monks from Melrose helped erect the first abbey buildings.

Queen Ermengarde died in 1233, only four years after founding the abbey. She was buried before the high altar of the abbey church. The church was extended with the addition of a south aisle later in the 13th century, and a chapter house was added in the 15th century. 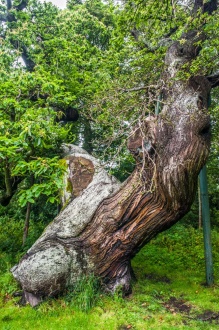 In 1547 an English raiding party set fire to the abbey. The main abbey buildings survived the attack and the abbey was quickly restored. The monks might have been forgiven for thinking they had survived the worst, but their peace was not to last, however, for in 1559 a group of religious Reformers sacked the Abbey.

This time it did not survive, and the abbey gradually fell into ruin. Finally, in 1936 the Earl of Dundee gave the abbey lands to the National Trust for Scotland. The Trust has restored the chapter house as a good example of medieval architecture.

The site is open to visitors at any reasonable time. There is an information board at the entrance to the site, and free leaflets were available from a dispenser when we visited. The leaflets have a map of the site and a brief explanation of the various parts of the abbey.

Unfortunately, when we visited the main part of the abbey, containing the chapter house and associated subsidiary buildings was closed off due to safety concerns. There is a short woodland walk around the site that passes an ancient chestnut tree.

Tradition says that the tree was planted by Queen Ermengarde herself when the abbey was founded. Unfortunately for romantic tradition, tree-ring dating suggests a date several hundred years later, but it is certain that the chestnut would have been standing when the abbey was in its heyday.

Part of the attraction of visiting Balmerino Abbey is the lovely, peaceful location, looking out over the Firth of Tay. 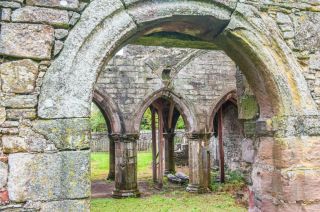 More self catering near Balmerino Abbey >>