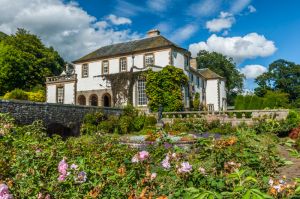 Hill of Tarvit House is an attractive Edwardian mansion was built on the site of an earlier house by architect Sir Robert Lorimer in 1906 for Frederick Sharp, a wealthy jute merchant from Dundee. Sharp wanted a suitable showpiece to display his collections of fine furniture and paintings, including paintings by such masters as Raeburn and Ramsay.

In 1696 John Wemyss of Uthank called in architect Sir William Bruce to build a small house called Wemyss Hall on this site. The house was gradually expanded over the following centuries, and in the 1840s a service wing was added behind the main house. Frederick Sharp bought Hill of Tarvit in 1904. He needed a house with good access to Dundee for his business interests, and to St Andrew's, for he was an avid golfer. Hill of Tarvit fit the bill perfectly, but the 17th-century house was not adequate for his needs.

Sir Robert Lorimer had just finished transforming Kellie Castle, ten miles to the west, so Sharp hired him to create a completely new, larger, and more fashionable mansion house. Lorimer retained the old service wings, but swept away the 17th-century central block, replacing it with the Edwardian villa we see today. 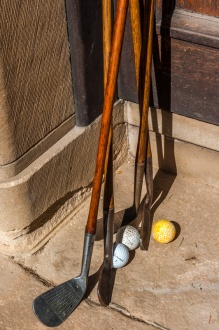 Hickory clubs ready for
a round of golf

Lorimer designed the 279 acres of parkland, woods, and heath, with a 40-acre formal garden area below the house. This includes a sunken rose garden, flowering borders, and yew hedges.

The interiors are pure Edwardian theatre, with beautiful furniture and elegant rooms made to show off the Sharp family's best pieces of art and furniture. There are paintings galore, French and Chippendale style furniture, and fine porcelain throughout.

The best pieces of French furniture are in the Drawing Room, where you can see pieces made by Adam Weisweiler for the court of Louis XVI. There is Georgian plasterwork in the Dining Room, with English furniture, and a large Flemish tapestry hangs in the Main Hall. You can also get a glimpse of life 'below stairs' in the restored servant's areas.

In a rather odd touch, the garden terrace overlooks a secluded 9 hole hickory golf club course, where you can recreate the experience of an Edwardian-style round of golf.

The original Hill of Tarvit replaced the medieval tower house at Scotstarvit, about 1/2 mile away. The ornate 1627 fireplace from Scotstarvit Tower was removed to Hill of Tarvit House when the mansion was built, and can be seen in the Smoking Room. You can get keys to Scotstarvit from Hill of Tarvit during mansion opening hours. 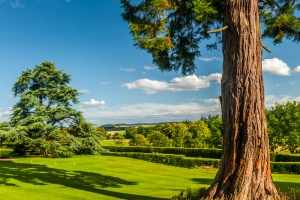 Looking out towards the
hickory golf course

We've been lucky enough to visit Hill of Tarvit twice, and each time I've come away impressed with the wonderfully scenic location and the magnificent views from the house. The interiors (which we sadly weren't allowed to photograph) is an opulent example of early 20th-century architecture, full of historic furniture and beautiful furnishings.

Unlike some historic houses, Hill of Tarvit encourages visitors to experience what life might have been like here during the house's pre-war heyday. We were able to enjoy playing snooker (very badly) in the billiard room, and there are croquet and golf clubs handy to enjoy playing games on the lawns, just as the Sharp family did.

From the house we explored the terraced garden, and peeked into the Edwardian Laundry, where we learned about the hard labour involved in being a laundry maid at a stately home; up at 5am every day and working hard until late evening. It is little touches like this that make Hill of Tarvit so enjoyable; you really get a sense of what life was like for both the Sharp family and the servants who kept the household running smoothly.

We asked for the keys to Scotstarvit Tower from the reception desk, and walked to the historic tower house. It is about a half mile walk and took us 15 minutes each way, plus about 10-15 minutes to explore the tower itself.

More self catering near Hill of Tarvit Mansion >>

More bed and breakfasts near Hill of Tarvit Mansion >> 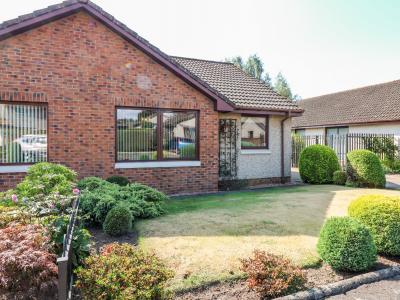 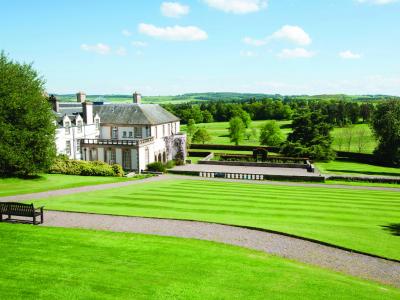 This first floor apartment rests in within the Edwardian Hill of Tarvit Mansion in Cupar, Scotland and can sleep four people in two bedrooms.
Sleeps 4