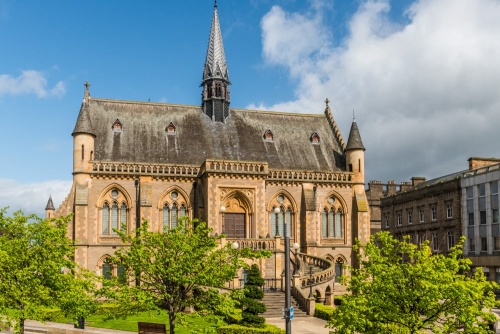 The McManus
A striking Victorian Gothic building houses 'The McManus' collection of Victorian and other Scottish paintings and local history exhibits.

When Queen Victoria's consort, Prince Albert, died in 1861 the city of Dundee decided on a suitable memorial to the prince; a large building in Gothic style to house a museum, picture gallery, lecture chambers, and a reference library. The city could not afford the full amount, so several private benefactors stepped in to meet the cost.

One of the leading Victorian architects of the day, George Gilbert Scott, was called in to provide the design. Scott was primarily known for his Gothic Revival churches, and his design for the Galleries was very much in the style of a large, rectangular church.

The site chosen for the new building was at a confluence of streams, which made the ground so soft that the foundations had to be supported on wooden beams. Despite these precautions, the ground was too unstable to allow Scott to build the imposing tower that he had planned. A much smaller central tower was built instead, giving the finished building a rather peculiar and unbalanced external appearance. A few decades later the building was extended to create a total of 8 galleries.

A civic museum and art galleries opened in 1873 and incorporated the collections of the Watt Institute. The building was run for many years by the library service, then in 1959 was taken over by the city and renamed in honour of the Lord Provost, Maurice McManus (the office of Lord Provost in Dundee is similar to the office of Mayor in many large cities).

The McManus has 8 galleries, arranged over 2 floors. The main focus is the heritage of Dundee and its people. Galleries include 'The Making of Modern Dundee', and 'Dundee and the World'. The Here and Now gallery hosts temporary exhibits, while the Long Gallery displays Dundee's heritage as a centre for ceramic making. Landscapes and Lives looks at the natural history of the Angus and Dundee region.

Learn how the small settlement at Dundee developed over time into a royal burgh. See examples of early Pictish carved stones, and a log boat found in the River Tay. The Victoria Gallery doesn't just display 19th-century art but recreates the ambience of a Victorian art gallery.

Among the works on display are the city's collection of historic oil paintings, works by Henry Raeburn, more modern art by the 'Glasgow Boys', and perhaps most importantly, Dante Gabriel Rossetti's famous Pre-Raphaelite work 'Dante's Dream on the Day of the Death of Beatrice'.

More self catering near McManus Galleries >>