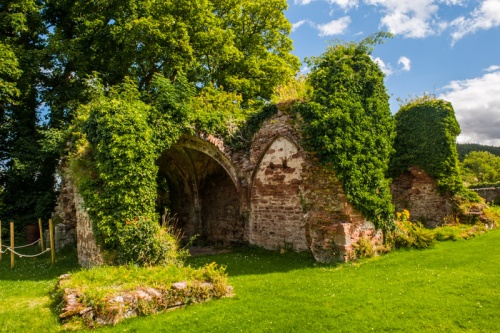 The ruins of a 12th-century Tironensian abbey stand on the edge of Newburgh. The abbey was visited by royalty, sacked by John Knox's followers, and is now a garden feature for the nearby farmhouse. 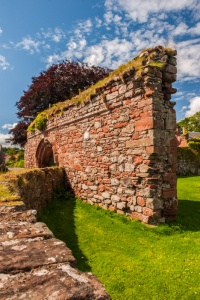 Around 1191 (or possibly 1178) the Earl of Huntingdon, brother of William the Lion, founded a Tironensian abbey on the edge of Newburgh. The new abbey was a daughter house of Kelso Abbey and took its name from the village of Lindores, over a mile to the south.

Most of the monastic buildings were completed during the rule of the first abbot, Guido of Kelso. The church must have been quite an impressive building, measuring 195 feet long, with transepts fully 110 feet in length. The church was constructed of local red sandstone, which unfortunately has suffered from severe weathering.

Lindores was visited by royalty on numerous occasions, but perhaps the most important event in the abbey's history occurred in 1284 when Prince Alexander, heir to the Scottish throne, died here at the age of just 19. Alexander's death precipitated a succession crisis that helped bring about the Scottish Wars of Independence. John Balliol, who subsequently claimed the throne, and Edward I of England, who (briefly) supported Balliol's claim, both visited Lindores.

James Douglas, 9th Earl Douglas, died at Lindores in 1488 and was buried here.

In 1494 the first recorded mention of whisky, in the royal Exchequer Rolls, shows that King James IV commanded Friar John Cor of Lindores to make 580 kg of aquavitae (water of life, another name for whisky). It seems reasonable to assume that the monks of Lindores were skilled in distilling the alcoholic beverage! 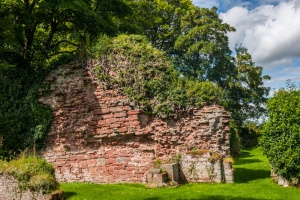 Ruined walls of the abbey church

In 1553 a mob from Dundee attacked the abbey, then in 1559 a band of reformers inspired by John Knox sacked the monastic buildings and tore down the buildings. Stone from the abbey ruins was robbed to for use in other buildings around Newburgh. For example, a stone set into the wall of the Bear Tavern on High Street shows the coat of arms of the Earls of Warwick. This stone was originally over the door of the Abbot's residence at Lindores.

In 1560 the abbey was officially suppressed and its belongings sold off. The abbey lands were split up and dispersed among several different families over the following centuries. In 1912 the abbey site and the adjoining farm were purchased by the Howison family, who still own both sites. The abbey ruins act as a garden space for the farmhouse.

The best-preserved feature is the stone gateway leading into the abbey site, and there is also a vaulted section of the slype; a passage from the cloister to the abbey exterior.

I've visited Lindores Abbey twice and I've yet to see a sign from any of the surrounding roads. Despite that, it is really easy to find. The ruins are rather appropriately on Abbey Road; not the famous Beatles location in London, but the minor road leading east from the outskirts of Newburgh in the direction of Balmerino. 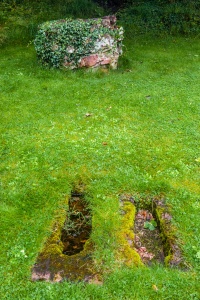 A pair of children's coffins

There is no signpost at the abbey, which is beyond a stone wall on the north side of the road (the left if you're heading towards Balmerino, away from Newburgh). In fact there are no signposts or information panels of any kind on the site, which does make interpreting the remains a little difficult. My wife and I were pretty certain we could make out the layout of the abbey church and the adjoining cloister, but it is rather hard to tell which bit of the ruins is what unless you're a medieval expert.

Having said that, quite substantial sections of foundations and ruined walls remain, including the partial remains of a vaulted undercroft. There are several stone coffins set into the ground; a pair of them quite small, suggesting infant burials. These are thought to be the children of the founder, David, Earl of Huntingdon.

One feature that makes Lindores unique is that since it is essentially the garden for the neighbouring house, you will come around a ruined stone wall and find an outdoor barbecue, or picnic table set into an alcove.

Both times we've visited the abbey the iron gates have been unlocked; in lieu of any actual signs to the contrary, I can only assume that the site is usually open to visitors. Even if the gates were to be locked, the stone wall is so low that you can easily see the abbey site without entering the grounds.

The ruins are not impressive the style of, say, Melrose Abbey, but it is quite an evocative site, and it's actually great fun to try and work out which bits of the ruins are which. 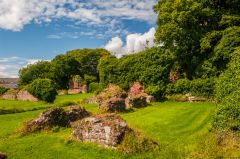 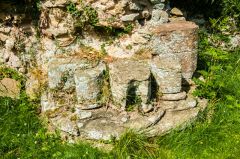 More self catering near Lindores Abbey

Self Catering near Newburgh