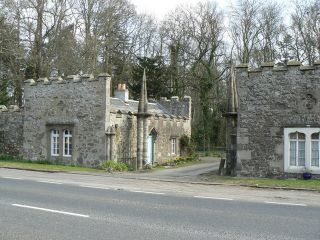 The turreted tower house of Megginch Castle was built (or rebuilt) in the late 16th century to a traditional L-plan, though the layout has been altered and the castle rebuilt several times since then. An inscribed stone bears the date 1575, presumably the date the castle was finished.

The builder was probably Peter Hay, who served as Chamberlain to the prestigious monastery at Scone. In 1664 the castle and estate were sold to the Drummond family. The castle was rebuilt by Robert Adam in the 18th century.

The gardens consist of a 19th-century formal area, with an ancient orchard and double-walled kitchen garden with a long herbaceous border. The orchard is noteworthy; it has been replanted with old Scottish fruit varieties. The orchard was featured in the BBC Two programme 'Beechgrove Garden'.

Other garden highlights include old yew trees and clipped topiary, including one rather fanciful piece of topiary in the shape of a corona. Look for colourful displays of rhododendrons and daffodils, see an astrological garden, a courtyard holding a dovecote raised on high arches, and a formal parterre with a fountain as its focal point.

The gardens are open on limited days under the Scottish Garden Scheme, or by appointment, with proceeds going to charity. The castle can be visited by pre-booked groups only. Megginch is listed by Historic Scotland in the Inventory of Gardens and Designed Landscapes in Scotland.

About Megginch Castle Gardens
Address: Errol, Perthshire, Scotland, PH2 7SW
Attraction Type: Garden
Location: 8 miles east of Perth, on the A90. Access from the south side of the A90 carriageway only, 1/2 mile past the Errol flyover.
Website: Megginch Castle Gardens
Location map
OS: NO241 246
Photo Credit: James Allan, licensed for reuse under the Creative Commons Licence