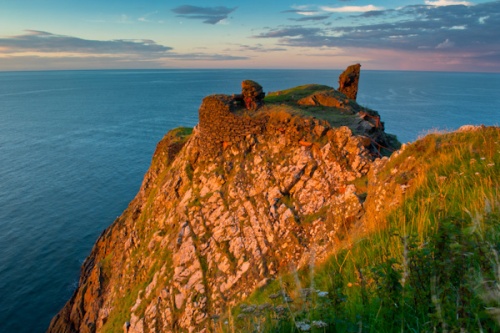 This dramatically situated medieval fortress sits on a rocky promontory on the aptly named Fast Castle Head. We do not know when humans first began to use the headland, but it seems certain that there was a simple fortress here as early as the Iron Age.

The first castle predates 1346, when we know from historical records that it was occupied by English troops following the Battle of Neville Cross. Fast Castle was captured by Patrick Dunbar in 1410 and it later passed into the hands of the Dunbar's great Borders rivals, the Home family.

Fast Castle's first real moment in the spotlight of history came in 1503, when Margaret Tudor, daughter of the English king Henry VII, stayed overnight here on her way to Edinburgh for her marriage with James IV of Scotland.

The castle was destroyed in 1515 during the ongoing struggles between the Stuarts and the Homes. It was rebuilt in 1521, only to be captured by the English in 1547 as part of Henry VIII's 'Rough Wooing' of Scotland. The Scots retook the castle once again, and Mary, Queen of Scots is known to have stayed here in 1566. once again the English captured Fast in 1570.

Ownership then passed from the Homes to the Logans, but when they were implicated in the Gowrie Conspiracy of 1600 it passed to the Earls of Dunbar, the Arnots, the Homes (again!), and the Hall family.

As if the real history of Fast Castle was not vivid enough, it was used by Sir Walter Scott as the model for 'Wolf's Crag' in his tragic romance, The Bride of Lammermoor. 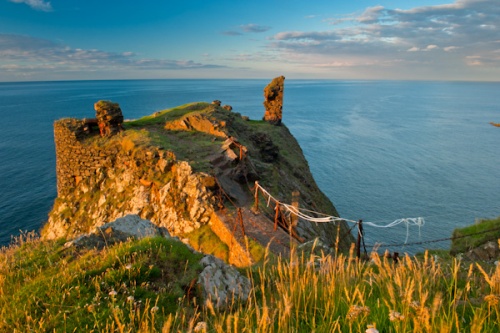 Fast Castle is an open site, so don't expect any tourist facilities. All you will get is a fabulous walk to the site, and the dramatic views of a crumbling ruin atop an exposed headland, surrounded by almost sheer cliffs. The original castle would have been accessed by a wooden drawbridge, but this has been replaced by a modern concrete footbridge, linking the promontory to the mainland via a very narrow passage.

The castle promontory was originally surrounded by a stone curtain wall, but only a fragment of this still stands near the bridge. Fragmentary sections of other walls remain, but there are no information signs to interpret the site, so you are rather left to your own imagination.

The best way to access Fast Castle is to take the road leading to Dowlaw Farm, signposted off the A1107 east of Old Cambus (northwest of Coldingham). Note that the castle itself is not signposted, just the farm! Follow the Dowlaw road for about two miles, and just before the farm, you will see a wide parking area. Here you will see a signed path to the castle.

The trail follows the edge of a plantation to a stile, across a field to a gate, then through the gate to the sea cliffs. Once through the gate, turn right and follow the obvious track along the cliffs. The trail will gradually turn downhill, and after about five minutes, just as you begin to doubt whether you've missed the way, the castle will come into view beneath you.

From the parking area to the castle is perhaps 15 minutes, mostly easy walking, through a gorgeous coastal landscape. Of course, what goes down, must come up, and returning to the parking area will require some effort!

As for access to the castle itself, it is pretty straightforward, though if you don't have a head for heights you may be put off, as the neck of land that joins the castle promontory to the mainland is extremely narrow, though there is a chain that you can hold onto for safety.

Once on the headland, do take care; there are no safety barriers, and if you wander too close to the edge it will be a long way down to the rocks below! That isn't meant to put you off - its perfectly safe if you just use common sense.

I have a bit of a love affair with Fast Castle. Our family stayed just south, outside Coldingham, for one glorious week in summer, and I visited the castle on several occasions, drawn back again and again by the fabulous coastal scenery and the sheer drama of the ruins.

Come on a sunny evening, when the late golden sunlight shines on the castle crag, and see if you don't think that it is one of the compellingly beautiful locations of any Scottish castle. 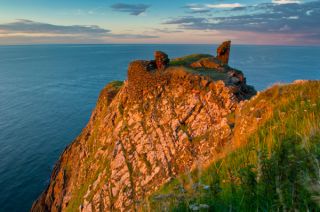 More self catering near Fast Castle >>

This superb Victorian cottage rests in the village of Coldingham, Scottish Borders and can sleep six people in three bedrooms.
Sleeps 6 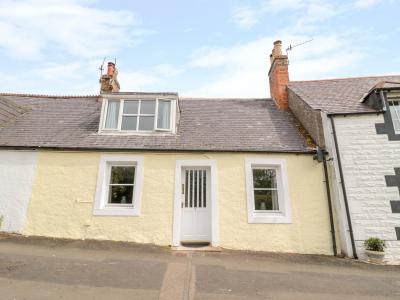 This terraced cottage rests in Coldingham and can sleep five people in three bedrooms.
Sleeps 5