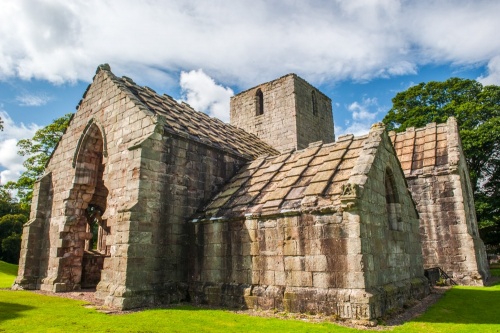 A 15th-century church that once served as a collegiate chapel. The original church at Dunglass was founded sometime prior to 1423 as the Chapel of St Mary. Sometime around 1443-4, it was refounded with a college of canons by Sir Alexander Hume (sometimes spelled as 'Home'), and the charter was confirmed by James II in 1450-51.

Hume endowed his new college with revenue from his estates at Kello, Gordounshall, and Balwlsy, and those revenues paid for one Provost, three Chaplains and four choristers. The endowment must have prospered over time, as by the Reformation the college consisted of a Provost, a dozen Prebendaries or Chaplains, and an unknown number of choristers. Hume's church was connected to a hospital for the poor, dedicated to St Mary and St John the Baptist.

The college of canons must have ceased at the Reformation, but the church was used for burials until well into the 17th century. In the following century, it was used as a farm store and stable, but it was rescued from further decay in the early 19th century when the patronage of Dunglass passed to the Hall family, whose mansion was built to the east of the church. The Halls used the south transept as their burial aisle.

The church is built to a cross-shaped plan, with a vaulted nave, choir, and transepts of golden ashlar under stone slab roofs. Almost all the building dates from the 15th century and is very well preserved. 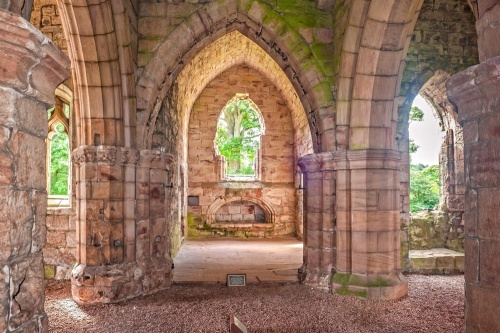 Dunglass has been loosely associated with the Knights Templar, based on several Templar-type painted crosses found on the walls, but there is no known actual connection to the Order.

Dunglass could be better signposted. The easiest access is off the A1 at the Cockburnspath roundabout, then take the road from the centre of Cockburnspath to the chapel. Alternatively (or if you miss the turning on the roundabout like we did!) you can park in the layby immediately north of the Cockburnspath turning (west side of the A1) and take a very pleasant path through the woods, under a railroad viaduct, and up the lane to the church. It's about a 10-minute stroll, and is very pleasant in nice weather. 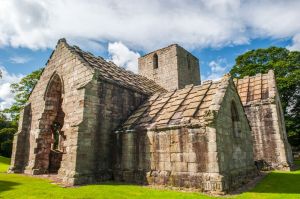 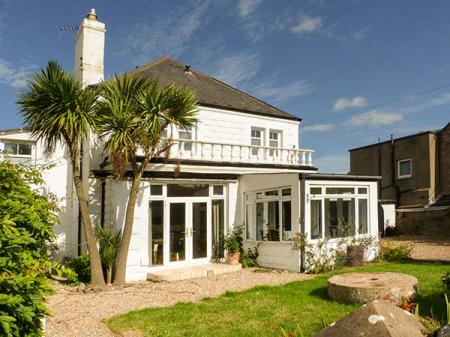