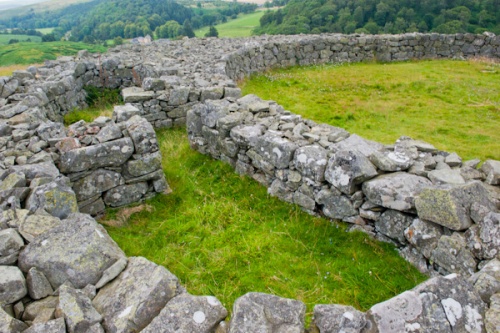 Edin's Hall is an impressive prehistoric site comprising a defended settlement with a large circular broch, within a series of earthwork ramparts and ditches. There has been no proper excavation of Edin's Hall, so we don't know for certain just how old the remains are. It is possible that the broch was built within a much earlier enclosure, possibly after the settlement had ceased to be occupied.

What makes Edin's Hall so intriguing is that brochs are uncommon in southern Scotland. Most brochs were built in the Highlands, and most of those far to the north-east in Caithness, Orkney, and Shetland. So it is rare to find a broch, particularly one in such good repair, so far south.

Historic Scotland is a little vague about exactly when Edin's Hall was occupied; the best guess is during the late Iron Age and on into the Roman period. 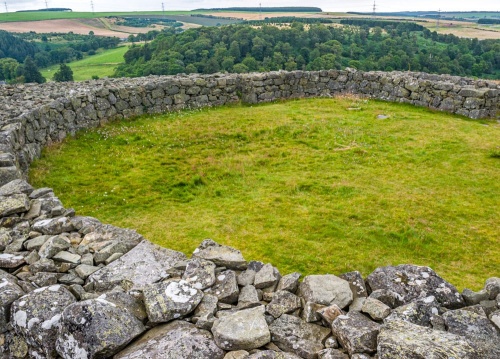 Most of the articles I read when researching a visit to Edin's Hall simply called it a broch, but that can give you the wrong impression; there certainly is a broch at the heart of the site, and a very impressive one it is, too, but the broch is only one part of a large fortified settlement occupying this mostly level site on the slope of Cockburn Law.

There are very obvious foundation walls of numerous buildings, some of which certainly look more like workshops rather than dwellings. The entire site is encircled by low banks and ditches. It really is quite an impressive site. There is an information board at the site entrance and another outside the broch.

As for the broch itself, it is very impressive, with massive walls, though none standing to more than about 4-5 feet high. The broch is entered by a single doorway which gives access to a central, circular courtyard.

There are three openings off the centre through narrow doorway passages which split two directions to create pairs of chambers served by a single opening. There are also two chambers near the main entrance which don't have any obvious entrance - perhaps they were storage areas reached from above, or cisterns for water?

I've read differing articles online of just how far the broch is from the parking area. Even the Historic Scotland website is rather unclear. I can tell you that it took us exactly 40 minutes to walk up to the broch, with a reluctant 10-year-old in tow, and we came back about 5 minutes faster, despite a rather unpleasant rainstorm.

It is a very pleasant walk, mostly level except for the last stretch up the hill to the settlement.

For goodness sake, do wear adequate footwear, though, as it can be muddy. The path is well signposted and should present no problems at all. Even if there wasn't an intriguing historic site at the end of it, the walk to Edin's Hall would still make for a very enjoyable outing in wonderful scenery.