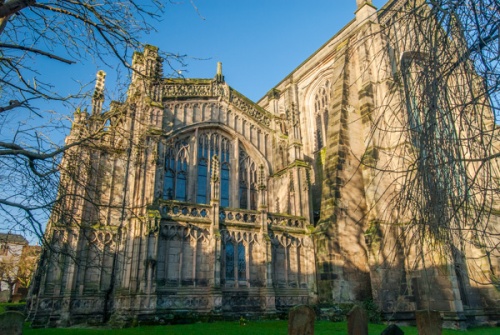 The historic church of St Mary was founded as a collegiate church (administered by a 'college' of a dean and canons) in 1123 by Roger de Newburgh, second Earl of Warwick. The style of Newburgh's church was decidedly Romanesque, with heavy, rounded pillars. The best surviving part of that Norman church is in the lovely crypt.

The early Norman church was rebuilt in the 14th century by Thomas Beauchamp, father and son, the first Beauchamp Earls of Warwick. The first Thomas Beauchamp financed his building of the chancel with money obtained from the ransom of a French archbishop.

The chancel, vestries, and chapter house were rebuilt in delightful Gothic style, making of St Mary one of the most attractive town churches of its day. The alabaster memorial to Thomas, who died of the plague during the siege of Calais, and his wife Katherine lies in the chancel. 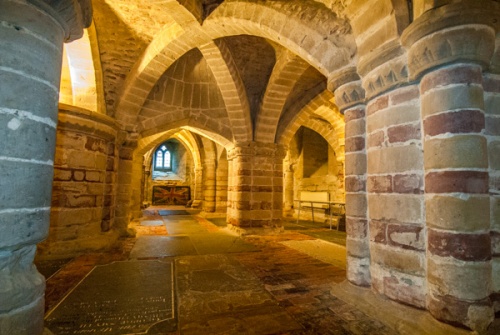 But the work of Thomas Beauchamp was about to be outdone by his descendant, Richard de Beauchamp (d.1439), who provided funds in his will for the creation of a chantry chapel in St Mary's.

This, aptly dubbed The Beauchamp Chapel, is one of the great Gothic architectural achievements in England. The executors of Beauchamp's estate spent over £2400, an enormous sum in those days, creating a masterpiece of Gothic style which took over 20 years to complete.

The chapel, which is dedicated to Our Lady, is composed of three bays, at the centre of which is the tomb of Richard Beauchamp, raised on a pedestal and surrounded by an iron fence. The effigy of Earl Richard is set upon a chest of Purbeck marble, with a canopy above, and latten (gilded in copper alloys) weeping figures below.

Beside the tomb of Earl Richard is that of Ambrose Dudley (d. 1590), whose effigy wears a gilded iron coronet, added in the 18th century. But the grandest tomb of all in the Beauchamp Chapel is that of Robert Dudley, Earl of Leicester (d.1588), and his wife Lettice (d.1634).

Dudley, the brother of Ambrose Dudley, Earl of Warwick, was a favourite of Queen Elizabeth, and one of the most powerful men in the kingdom. His tomb is set into the north wall of the chapel, beneath a gilded canopy. 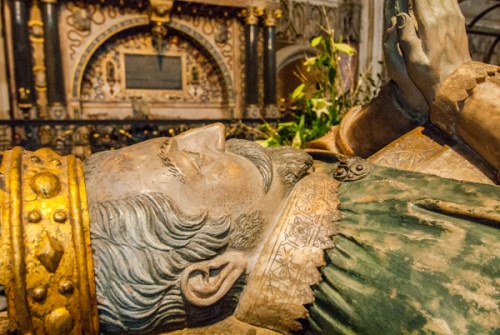 You may have heard of the Great Fire of London. Well, Warwick had its own Great Fire, in 1694. The blaze destroyed much of the old medieval town, and the nave and tower of St Mary's were lost.

Sir Christopher Wren, the architect of St Paul's in London, submitted a design for reconstruction of the church, but Wren's design was rejected in favour of one by Sir William Wilson of Sutton Coldfield.

The most striking aspect of Wilson's design is the west tower, which stands 174 feet high, and, unusually, projects out into the road, with arches on three sides to allow passage under the tower for foot traffic. The modern road skirts around the tower arches, but one can't help but feel a trifle exposed, pausing under the tower arch and seeing traffic bearing down on the opening in which you stand!

The 17th-century nave was built to give a sense of great height, something it achieves beautifully. The pillars are very high, in Perpendicular Gothic fashion. On the wall of the south aisle are two 'bread cupboards', or 'dole shelves', where, until quite recently, loaves of bread were handed out to the poor of the parish. 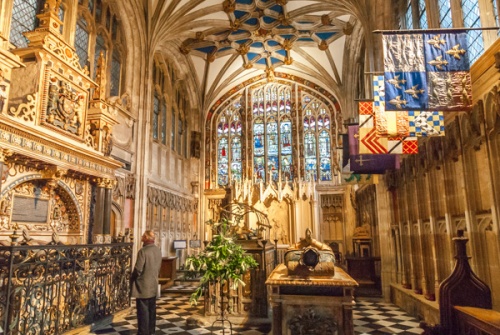 The small chapter house has seats for 8 canons and the Dean of St Mary's, but it is hard to see the canopied seats properly because the chamber is filled almost to the ceiling by the tomb of Sir Ffulke Greville (d.1628). Greville came from a line of rich wool merchants based in Chipping Campden, who rose to a position of prominence during the Tudor period.

He was granted Warwick Castle by King James in 1604, and rebuilt much of the castle during his lifetime, before he was murdered by his manservant (see our Warwick Castle article). The tomb is quite plain, compared to those in the Beauchamp Chapel, with a sarcophagus and pillars of black marble.

Without a doubt a church that deserves to be visited, St Mary's is one of the highlights of a visit to Warwick and is easy to reach from any of the car parks in central Warwick, and from Warwick Castle (5 minutes walk). There are free guide sheets available which describe the history and major features of the church. The tower can be climbed in season, and there is a brass rubbing centre and shop in the church.