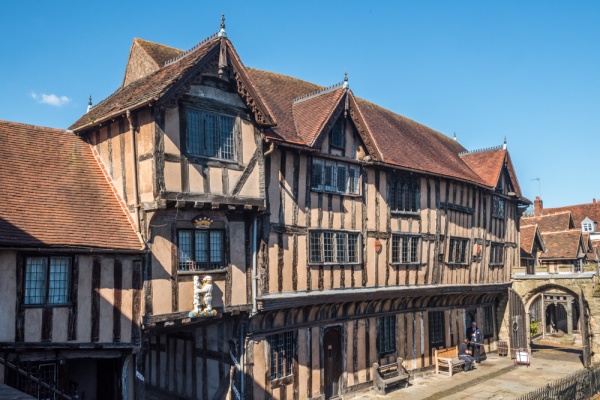 Lord Leycester's Hospita is a collection of superb half-timbered medieval buildings established as a home for aged and infirm soldiers by Robert Dudley, Earl of Leicester, in 1571. 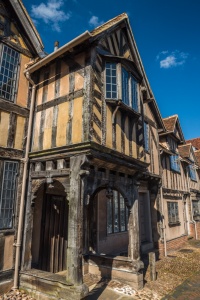 The Hospital is not one building, but a collection of buildings just inside the medieval Westgate to the town of Warwick. In the late 14th century Thomas Beauchamp, 12th Earl of Warwick built a chantry chapel dedicated to St James over the gatehouse. This chapel was given to the Guild of St George in 1383 to act as its chantry chapel.

Another of Warwick's guilds, the Guild of the Blessed Virgin, joined with the Guild of St George. The size of the resultant guild, which became the United Guilds of Warwick, meant that expanded quarters were needed for meetings and other guild functions. So several buildings were constructed to provide meeting rooms, dining areas, and living quarters.

Henry VIII disbanded the United Guilds in 1546, and the guild buildings might well have been lost to the crown. The Master of the United Guilds, however, one Thomas Oken, saw the end coming and transferred ownership of the guild property at Westgate to the Burgesses of Warwick (the Tudor equivalent of a modern town council).

The buildings did not stay with the Burgesses for long, however; in 1571 Robert Dudley, Queen Elizabeth's favourite, purchased the property and, under a royal charter, created a home for 12 aged or infirm soldiers and their wives. To administer the 'Hospital', a corporation was established, with a Master overseeing operations. The corporation was endowed with estates which at that time produced an annual income of £200. 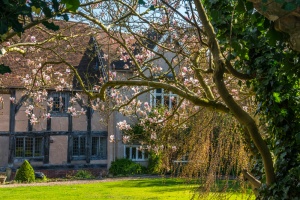 The Hospital was divided into separate quarters for the Brethren residents. And so things stayed for almost 400 years, with the corporation administering the Hospital under a charter laid down by Lord Leycester (the Earl of Leicester).

In 1954 the Corporation was abolished, replaced by a Board of Governors, and the Hospital was refitted and modernized. The number of living quarters was reduced to 8 rather than the original 12, and the remodelled Hospital was officially opened by Queen Elizabeth, the Queen Mother, in 1966.

Though it has been modernized, the original purpose of Lord Leycester's Hospital has remained unchanged. It provides living quarters for ex-servicemen and their families. In exchange for the living space, the residents contribute to the administration and upkeep of the Hospital.

The original estates which were supposed to provide income for the Hospital were sold off over the centuries, and today Lord Leycester's Hospital depends on visitors entrance fees and charitable gifts.

The architecture of the half-timbered buildings is quite superb, with some excellent roofing and entry porches to the living areas. Within the centre of the compound lies the Master's Garden, a quiet, peaceful green space planted by the wife of a former Master.

Lord Leycester's Hospital is located at the western end of High Street, just inside the Westgate, signposted and easily reached on foot from the town centre. As you enter, spare a glance across the High Street where further medieval buildings still stand. In the same group of buildings that houses Lord Leycester's Hospital is the Queen's Own Hussars Museum, located in the 15th-century Guildhall. 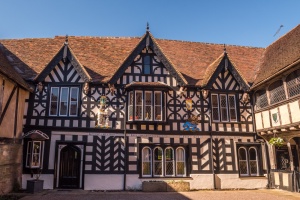 Another view of the Courtyard

I had walked past the Hospital exterior several times and always been fascinated by the picturesque timber-framed buildings. when we finally made time to visit I was bowled over by the superb historic buildings. We bought tickets in a small chamber in the rambling frontage that looks onto High Street, where an ex-serviceman resident gave us a brief history of the property and a leaflet about the major rooms we would visit.

Then we were free to wander, starting in the old chapel over the West Gate, where the Master and Brethren gather daily for worship, following a very specific set of words established by Robert Dudley when he established the Hospital.

Much of the chapel furnishings are Victorian, with a window over the door by William Morris and a superb east window by Clayton and Bell. The Victorian restoration was by Sir George Gilbert Scott, probably the most important 19th-century church architect in Britain.

Then we went down a set of stairs to the Guildhall, built soon after the guild charter was granted in 1383. The hall was used for public functions and is notable for its timber roof, made primarily of Spanish chestnut. The most important event held at the hall came in 1617 when James I was entertained here on a state visit to Warwick. The entertainment was so expensive that the town was in debt for 10 years after the king's visit! 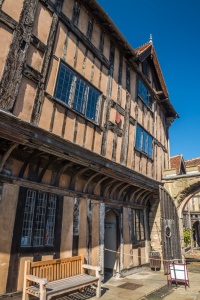 The courtyard is decorated with heraldic symbols of families linked to the Hospital, including the Bear and Ragged Staff emblem of the Earls of Warwick and the porcupine symbol of the Sidney family.

When Robert Dudley died without an heir in 1588 he left his property to his nephew, Sir Philip Sidney, the famous Elizabethan soldier-poet. Look for another Sidney emblem, the broad-headed arrow, used to identify Government property since the time when Henry Sidney, Earl of Romney, was Master General of the Ordnance.

One one side of the Courtyard a stair leads to the Guildhall, built around 1450 by Richard Neville, Earl of Warwick, known to history as 'The Kingmaker'. At the centre of the chamber is the original table where Guild members conducted business, and the chair used by James I when he dined in the Great Hall in 1617.

Part of the guildhall now houses a museum of the Queen's Own Hussars regiment. A large part of the regimental museum is housed in the former Chaplain's Dining Room off the main hall.

Below the Guildhall is the former Brethren's Kitchen, now a popular cafe. Brethren cooked and ate meals here until 1966. On one wall is a framed copy of Robert Dudley's will, and beside it is a piece of embroidery by his first wife, Amy Robsart.

In 1560 Robsart was discovered dead at the bottom of a staircase at Cumnor Hall in Oxfordshire, and there were whispers that Dudley himself had her killed so that he would be free to marry Queen Elizabeth I. Beside the will and embroidery is a large oak cupboard thought to have once belonged to Elizabeth I and been brought here from Kenilworth Castle.

Beyond the Brethren's Kitchen is a small knot garden and a passage leading to the Master's Garden, a delightful garden area ringed with hedges, planted by the wife of a former Master. In one corner is a two-storey summerhouse offering wonderful views across the garden below.

Lord Leycester's Hospital is a delight to visit; it is one of the best-preserved and most enjoyable timber-framed buildings in England. 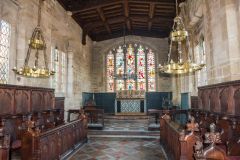 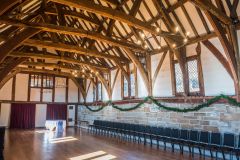 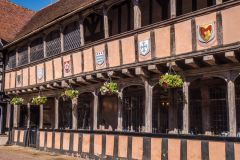 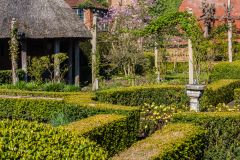