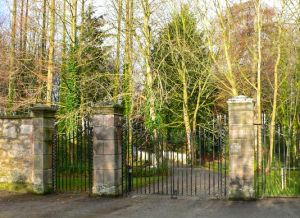 The entrance gates to Brynbella
Btynbella is a modern garden incorporating a historic 18th century garden, set below a Palladian villa built by Mrs Thrale, a friend of Dr Johnson.

Hester Salusbury was a Welsh diarist, author, and patron of the arts, and one of London society's most prominent 'bluestockings'. She was a close friend of Samuel Johnson, and her letters to Johnson are one of the best sources of information about his life. Johnson considered Mrs Thrale to be the only female intelligent enough to converse with!

In 1763 Mrs Thrale married a wealthy brewer named Henry Thrale. With her husband's wealth to launch her into society she became a patron of the arts and counted playwright Oliver Goldsmith, Sir Joshua Reynolds, Edmund Burke, and author Fanny Burney among her friends.

When Henry Thrale died in 1781 her literary friends expected Hester to marry Johnson, but she surprised everyone by marrying Gabriel Piozzi, her daughter's music teacher. The match astonished London society, for not only was Piozzi poor, he was a Roman Catholic, and foreign. The couple had to retreat from the limelight, shunned in polite circles. Johnson cut off all ties with Mrs Thrale, as she is usually known.

Hester Piozzi spent time in Italy, then eventually retreated to Wales, and in 1794 she built a neoclassical villa at Tremeirchion to seve as a family seat. The original family seat at Lleweni Hall had passed to the 1st Viscount Combermere, and Piozzi wanted to create a new home for her branch of the Salusbury family. The name combined the couple's native languages, with Bryn coming from the Welsh for hill and bella from the Italian for beautiful.

The house was designed by Clement Mead and was exhibited at the Royal Academy in 1794. The house was built using bricks from the nearby house of Bach-y-Graig, which are among the oldest bricks in Wales. The house was built in Portland stone, and in the style of Palllladian villas Mrs Piozzi had seen on trips to Italy. The result is considered the best Georgian villa in Wales.

Surrounding the georgian house at Brynbella are 9 acres of beautiful garden and woodland. One of the highlights is a gravel garden, winner of a British Association of Landscaping Industries award. Other garden areas include a walled garden, formal and informal garden areas, and no less than 3 separate water gardens.

The gardens were quite overgrown when Mr and Mrs Peter Neumark purchased the property in the 1990s. Rather than try to resurrect the garden exactly as it was they chose to create a modern garden while retaining as many of the 18th century features as possible.

The garden is laid out as a series rooms, so that not all the garden areas can be see at once. This leads to constant visual surprises as you pass from one garden area to the next. The garden is dotted with focal points such as statuary, modern sculpture, and rather amusing features like a bronze scarecrow in the walled garden. Materials are a mix of modern and traditional, with both symmetrical and asymmetrical layout. The layout offers a constantly varied glimpse of vistas to distant viewpoints.

Visitors follow paths lined with neatly trimmed box hedges and beds of flowers. One of the summer highlights is a gorgeous wisteria arch, which leads to a parterre set off by hedges and roses. Below the walled garden the vista opens out, with views across the Vale of Clwyd. The rock gardens are a delight, with a stream tumbling down small cascades to a small pond. Everywhere are delightful statues that act as focal points for the garden rooms.

NOTE
The gardens are usually open on specified days between spring and autumn, or by prior appointment. Please see the official website for the current opening dates.

More self catering near Brynbella Garden >>