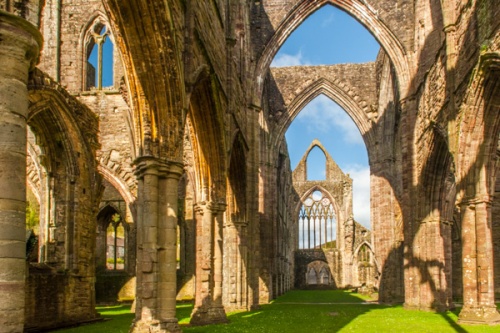 The very first Cistercian house in Wales, founded around 1131. Tintern is superbly situated in a valley bounded by hills which are resplendant in bluebells and other wildflowers in the spring. The original church dates to 1150, though it was rebuilt in grand fashion in the late 13th century. At the time of the Dissolution, Tintern was the richest monastic establishment in all of Wales.
History

In 1131 the Norman lord of Chepstow, Walter fitz Richard, established the abbey here. Fitz Richard was a member of the powerful de Clare family, and his abbey was the first Cistercian foundation in Wales - and only the second in all of Britain after Waverley, in Surrey.

The monks for the new abbey came directly from France, from the abbey of l'Aumone. It is intriguing that despite Tintern's early foundation, it established no further daughter houses in Wales.

The monks were granted sizeable estates on both sides of the Wye, the border between Wales and England. By the middle of the 13th century, Tintern administered a dozen granges, or remote farmsteads.

Even better days were to come, for when Roger Bigod III, Earl of Norfolk, inherited the lordship of Chepstow in 1301 he granted the abbey his estate at Acle, some 200 miles away. The Acle manor was to provide up to one-fourth of the abbey's income. 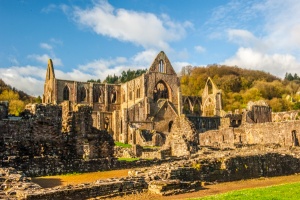 The Abbey from the riverside

It seems likely that the first monastic buildings began within a decade of the foundation in 1131. The first church was fairly simple, but gifts by the Earl of Pembroke, William Marshall the Younger, around 1223 helped finance a great building programme.

It is fascinating to see how the early 13th century remains of the abbey church and the chapter house drifted away from the austere philosophy of the early Cistercians and became works of art, embellished with beautifully carved details. In contrast to normal Cistercian simplicity of design, Tintern was decorated with intricate floor tiles and painted glass.

From 1269 the abbey church was rebuilt from scratch, under an anonymous master mason who is known to us only through the superb quality of his work. The new church grew up around the old Norman church like an outer shell, allowing the monks to continue to worship in the old church until the newer one was finished.

One of the last pieces of the church to be added was a great pulpitum stone screen, built around 1325 to divide the nave and choir. Pieces of this screen are on display in a special exhibition area near the abbey entrance. 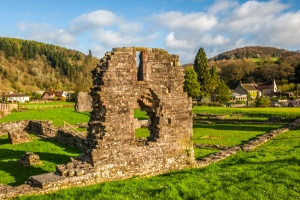 By the middle of the 14th century, the abbey had roughly the shape we see today, enclosing an area some 27 acres, including guest accommodation, private lodging for the abbot, a grand gatehouse facing the River Wye and another on the slope of the hillside above.

By the time of the Dissolution the abbey had abandoned maintaining remote granges, and instead, relied on renting out its estates to tenants. An audit by Henry VIII's men in 1535 found that Tintern had an annual income of 192 pounds, making it the wealthiest monastery in Wales.

The last abbot, Richard Wyche, surrendered Tintern to the king's commissioners in 1536, and the Crown granted the property to Henry Somerset, Earl of Worcester.

The abbey was left to decay, and the stone was used for local building projects. However, the beautiful setting and the relatively easy river access from Chepstow made Tintern extremely popular as a destination for artists, especially during the heyday of the 'Romantic' period in the early 19th century. Turner painted the crumbling ruins, and William Wordsworth eulogised over the picturesque location, 'set beneath 'steep and lofty cliffs' on the banks of the 'sylvan Wye'.

Most modern visitors would find themselves agreeing with the poets rather florid praise, for the setting of Tintern Abbey is what sets it apart. The abbey ruins stand on level ground beside the river, under high hills that turn green and reddish brown in the sunlight. The Wye is tidal here at Tintern, so twice a day the river changes direction, turning the water a muddy brown colour at odds with the greenery of the surrounding countryside. 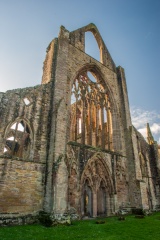 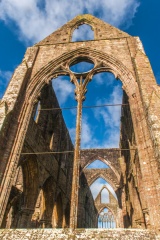 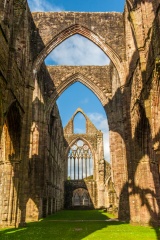 Looking west from
the presbytery 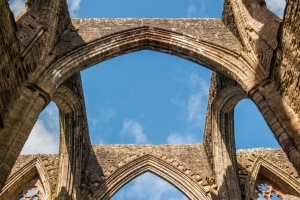 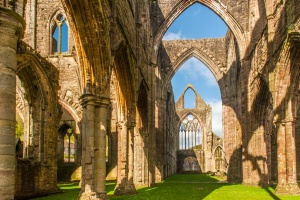 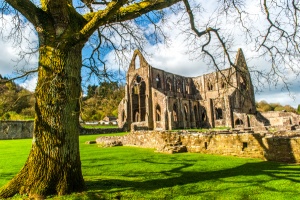 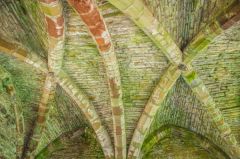 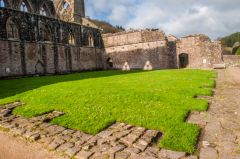 More self catering near Tintern Abbey >>