HERITAGE HIGHLIGHTS:   In the same family for over 5 centuries 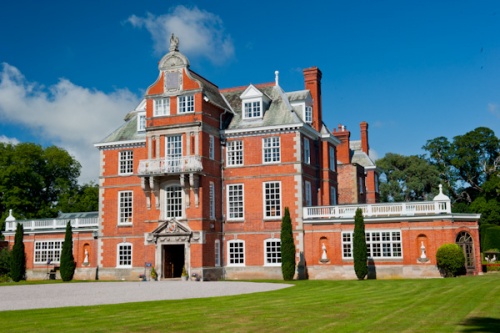 A 17th-century red brick house on much older foundations, Bodrhyddan is the home of Lord Langford, whose family have inhabited Bodrhyddan for over 500 years. There has been a house here since the 14th century, but the present building is largely 17th century with Victorian additions. On display are period furniture, armour, and an unusual 3000-year-old mummy! 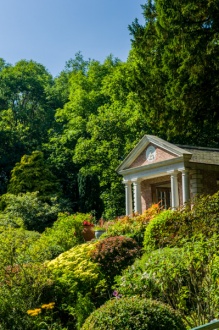 Bodrhyddan has been in the hands of the Conwy family for over 500 years and is among the few Grade I listed houses in Wales to be still in private hands. The first house here was erected in the medieval period, possibly as early as the 14th century, and was built of timber with wattle and daub infill. This was replaced in the 15th century by a stone manor.

The elegant building we see today was designed in the 17th century and then extended by William Eden Nesfield in the 1870s. Nesfield 'turned' the house on its axis, creating a mile-long drive to nearby Rhuddlan and making a new entrance facade facing west, in lovely Queen Anne Revival style. The old front door then became the garden entrance.

Surrounding the house is a mix of formal and informal gardens. The parterre close to the house was designed by architect William Nesfield during his Victorian remodelling of the house. However, the oldest parts of the park were laid out in the early 17th century, possibly with help from Inigo Jones. 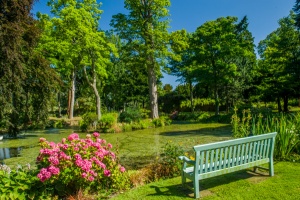 A bench beside a garden pond

There are yew paths and woodland walks, a walled kitchen garden, and several small ponds, creating a wonderful mix of pretty period features.

In the grounds is St Mary's Well, an ancient holy well located beside the entrance drive to the house. There is an odd wellhead with an octagonal roof and seating a pool. From the pool, the water flows into a stone-lined bathing pond. We don't know how old the well is, but it appears in records as early as 1699.

An inscription attributes the wellhead to Inigo Jones, the famous society architect who worked in the early 17th century, but the inscription and style of stonework appear much later. It is, however, quite possible that Jones helped design the Bodrhyddan gardens around 1612 and the inscription was added at a later date. 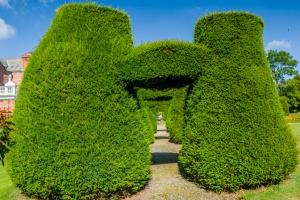 Bodrhyddan primarily markets itself as a wedding and group venue, so regular visitor openings tend to be limited to a few afternoons a week during the summer months.

If you can time your visit for those opening times, however, the result is an extremely enjoyable one! The house is simply wonderful, and it is such a thrill to see a historic house like this still in private hands and used as a family home.

Access is only by guided tour, which lasts about 1 hour and focuses on the Victorian parts of the interior, with stories about the family members and the objects they brought back to Bodrhyddan from their travels. Among the collections on display is quite a large array of armour, some of it dating to the medieval period.

The 8 acres of gardens are extremely pretty, a wonderful mix of formal beds near the house and more informal grounds further out. You can visit the gardens alone or get a joint ticket for gardens and house. I would highly recommend the latter! I very much enjoyed visiting and wouldn't hesitate to recommend Bodrhyddan. 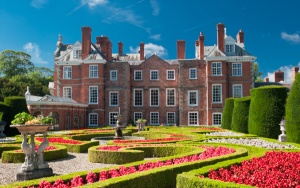 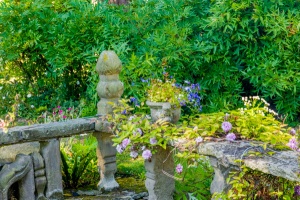 A quiet corner of the garden 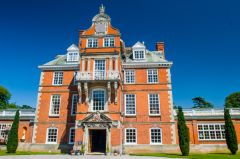 More self catering near Bodrhyddan Hall >>