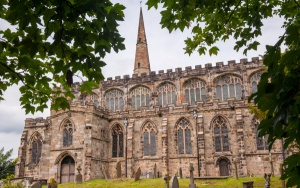 The village of Astbury sits just south-west of the ever-increasing urban expanse of Congleton. The village was named as Newbold in the Domesday Book of 1086 when it had a priest, but no church. The priest must have had some sort of building in which to hold services, but there are no definite remains, though Saxon stone fragments have been found in the area.

In the churchyard is the base of a stone cross of possible pre-Norman date, so if there was not a church here there may well have been some form of Christian worship. The oldest part of St Mary's dates to the middle of the 12th century, in the form of a simple round-headed doorway leading to the north aisle.

The 12th-century building was probably built mostly of timber, but in the mid-13th century the chancel was rebuilt in stone. Most of this 13th-century work has survived intact, including a plain priests door. In the north wall is a small trefoil-headed window, of the kind usually - and wrongly - called a leper window.

Most of the rest of the church is a jumble of 14th-16th century work. The result is a layout almost unique in English parish church architecture; a trapezoid plan, wider at the west than the east, with the design 'pinched' along the centre line of the nave and chancel. In fact, the nave is 40 feet wide at the west end, wider even than Chester Cathedral. The aisles are normal rectangles, so the nave arcades are angled. 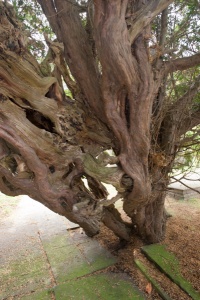 In the Lady Chapel is a 13th-century three-seat sedilia and piscina in Geometric Gothic style. There are no less than 6 old chests inside the church, one of which is bound with iron straps and dates to the 13th century. There are several excellent historical monuments, including the effigy of a 14th-century knight in the Lady Chapel, near a 1654 tomb chest.

In the vestry is a recumbent effigy of Lady Egerton (d. 1599). Lady Egerton died before St Mary's suffered the indignity of having a troop of Roundhead soldiers stable their horses inside the church during the Civil War attack on nearby Biddulph Grange.

Perhaps more fascinating than the interior is what stands outside in all weather. The most interesting historic feature is the wonderfully ornate canopied tomb. Opinion seems to vary on how old the tomb is and who it commemorates. It may be late 13th century and be a memorial to a member of the Venables family, or it may be 14th century and commemorate Sir Ralph Brereton.

The tomb chest has effigies of a man and woman holding hands. There is another ancient effigy to the north of the canopied tomb, showing a cleric, and to the south is a third medieval effigy of a knight in armour.

Set over a doorway in the north-west corner of the church is a fragment of a Saxon cross shaft, decorated with spirals and curved lines. This is thought to be of 10th or 11th-century date.

In the north-east corner of the churchyard is an extraordinary yew tree thought to be 2000 years old. It is hollow now - not surprising - and propped to prevent it from falling, but still a living tree.

And finally, the stone gateway to the churchyard is 17th century, with a battlemented parapet and finely carved pinnacles. 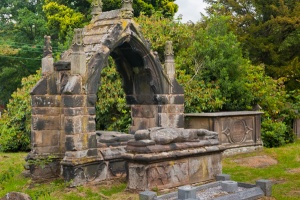 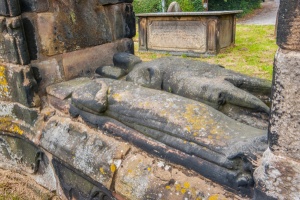 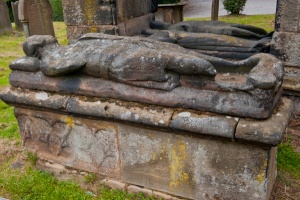 Effigy of an unknown knight 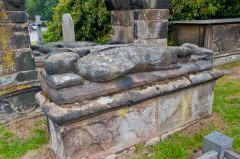 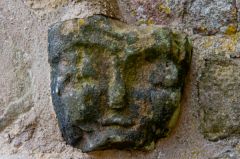 More self catering near Astbury

More bed and breakfasts near Astbury