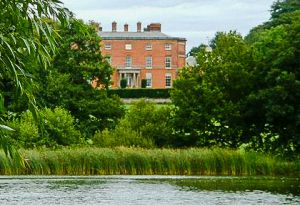 Rode Hall
Rode Hall is an early 18th-century country house set in a landscape garden designed by Humphry Repton. The house was built in 1705 and extended in 1752. It is built of red brick and features Regency interiors introduced by John Hope in the early 19th century.

One of the highlights of Rode Hall is the extensive collection of English ceramics, dating from 1730. Among the items in the collection are a Royal Crown Derby botanical service and a number of fine teapots.

Rode Hall has been the seat of the Wilbraham family since 1669 when Randle Rode sold the estate to his cousin Roger Wilbraham. Randle Wilbraham demolished a medieval hall on the site and completed the new Rode Hall in 1708. Much of the fine furniture within the house was made by the Gillow company of Lancaster.

In 1790 Humphrey Repton was commissioned to transform the park at Rode into a landscape garden. Repton did not get the chance to implement his ideas, so John Webb of Cheshire carried out the work to Repton's design. Among Repton's creations was a huge lake, over a mile in length, and enclosing over 40 acres.

Closer to the house is a formal garden added for Randle Wilbraham by William Nesfield in 1861. There is also an attractive kitchen garden area, which boasts of the fact that within its brick walls was grown the world champion gooseberry in 1993!

More self catering near Rode Hall >>