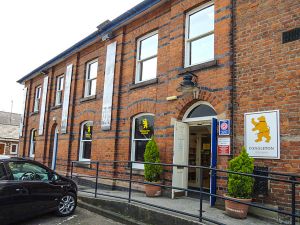 Major themes are prehistoric Congleton, the English Civil War, the textile trade, and World War Two. Among the most interesting historic exhibits is a burial urn dated to 1500 BC. There is not one but two hoards of 17th-century coins found locally, and the Astbury Log Boat, made locally in the late Saxon or early Norman period.

In the Tudor period, Congleton became prosperous from lace making and leatherworking. see examples of Congleton 'points', leather strips tipped with silver that were used to fasten clothing.

One humorous story tells a lot about the Tudor period when bear-baiting and cockfighting were popular entertainments. It seems that the town was saving to buy an official Bible. Just before an annual holiday, the town bear died.

The town government had a choice to make. They took 16 shillings out of the Bible fund to buy a new bear for the baiting. The story gave rise to a funny, if not totally accurate, rhyme that runs,

The Civil War period comes to life through the life of John Bradshaw, a former mayor, who was a staunch supporter of Parliament and became the first man to sign Charles I's death warrant. A vivid reminder of the Civil War conflict is a cannonball, still embedded in a piece of walling taken from Biddulph Hall, just a few miles away. 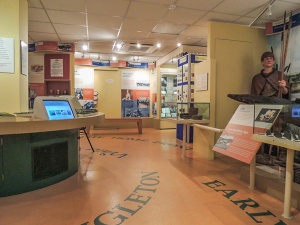 The textile trade transformed Congleton in the 18th century, The first silk mill was opened in 1752, followed by ribbon weaving and cotton spinning. The burgeoning textile industry made improved transportation a necessity, and brought turnpike road, followed by the Macclesfield Canal, and eventually, the railway.

The silk trade declined when taxes on French imports were removed, but velvet and fustian cutting began to flourish from 1867. Even today Congleton is a centre for well-made tapes and ribbons. The textile heritage is brought to life by a life-sized model of a fustian cutter at work, surrounded by specialised tools for cutting fustian cloth.

The museum trust was formed in 1985 by a group of local history enthusiasts. The museum opened in 2002 in the old police station behind the town hall. The museum offers regular guided tours of the town centre focussing on heritage. It also maintains a large collection of historical archives including official charters, public and private account books, private papers, plus over 5000 historical photographs tracing the history of Congleton through images.

More self catering near Congleton Museum >>