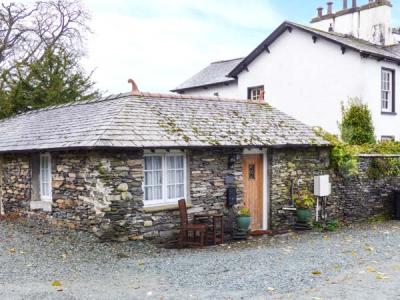 This cosy, semi-detached studio cottage is in the village of Near Sawrey, near Sawrey itself in Cumbria and can sleep two people in one bedroom.

Ees Wyke Studio is a cosy, semi-detached studio cottage in the village of Near Sawrey, close to Sawrey itself in Cumbria. The cottage can sleep two people in open plan studio accomodation with one double bed, a kitchenette, dining area and sitting area.The cottage also contains a shower room.

To the outside of the cottage is off road parking for one car and a from gravelled sitting area with furniture. Located in beautiful countryside, Ees Wyke Studio is a lovely cottage suitable for a great holiday at any time of the year.

A miserable hovel made worse by lousy customer service from Sykes Cottages
The property was so miserable and so sub-standard in its basic safety that we left it before our full week was even up. What follows is a detailed report of the problems, with the most disgusting hygiene and safety aspects of the bathroom listed first: 1) Interior: shower and lavatory area. This is a disgrace and a hazard. There is mould round the base and sagging plinth of the shower, and on the adjacent wall, which a small pedal bin was no doubt intended to hide. The loo itself is not securely attached to the floor, and therefore tilts; what this means in terms of sewage disposal does not bear thinking about. The tap on the washbasin spurts out so excessively that I took the plug out, only to find it covered in mould and slime. There is no provision for drying wet garments as the small towel rail cannot even hold towels for 2 people! 2) Arrival and exterior. The information says the key must be collected from the key safe near the front door. The safe is actually unreachable, and I had to drag a wooden garden chair to climb on and reach it. Is this classed as a safe procedure? The key was not actually in the safe when I finally succeeded in opening it, so I had to ask for it at the adjacent hotel. The person whom I assume was the proprietor said he knew the safe was too high and would lower it immediately, but this never happened in the 4 days I could tolerate staying there. Holiday makers are instructed to take a torch if arriving at night is because the outside light does not work and has obviously not been repaired. 2) The advertising information also said there was a small seating area outside. In fact, the two chairs and table were actually hard up against the studio on part of the allocated parking bay, past which cars going to the hotel rattled along the gravel. Unpleasant after 5 minutes! 4) Interior: "kitchenette". The advertising photos do not show how inadequate this is, and how badly equipped. It is difficult to class this place as "self-catering". I had to ask for: egg cups, an oven glove, a strainer or sieve, pan(s) with lid(s), a chopping or bread board, and a bread bin. There is no provision at all for storing any food, not even tea or coffee. There is no room to do the simplest cooking. The fold-up table, which I tried to use as the only surface both for storing food and on which some simple meals could be prepared, when pulled out blocks the door to the shower/loo area! Then there is actually no room on the floor for the two hanging chairs obviously meant to be used for dining. The combi microwave, like the kettle, is located on an upper shelf which I could only just reach to put food in. To take food out from this, I had to stand on a flimsy, fold-up plastic stool which, given the lack of oven glove until I asked for one, is dangerous when handling hot food. The oven door swings out at head height as this happens. All food preparation, including just making a drink, can only be done in conditions which defy all health and safety legislation. The sink is rectangular but the washing up bowl provided is square, so water is liable to splash out when the bowl is emptied. Judging by the mould at the bottom of the wall, some liquid must get trapped between the sink or cupboard and the wall. The dish rack is not big enough to hold one person's pots, let alone the two for which the cottage is advertised. There is no washing machine provided, so anyone who has had an "action-packed adventure" (as the promotional text proclaims!) and got wet has nowhere either to hang or wash their clothes. Furthermore, when I asked the proprietor if therefore it was possible to use the hotel machine he said it was not. We left early and then had to endure with endless emails and telephone conversations with Sykes, as they and the owner squabbled between themselves as to who was liable for providing me with some eventual meagre financial compensation. For the record, Sykes have either a) let this cottage out without even inspecting it, trusting entirely the owner's dubious and inflated description or, b) they have seen the mould, shaking toilet and wholly inadequate kitchen and decided to let it anyway as there is alway good money to be made from doing bad to people.
Ralph11309
2018-11-05

Get an Ordnance Survey map covering the Sawrey area.