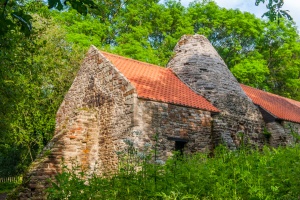 Tucked down a quiet lane off the A694 between Hamsterley and Rowlands Gill stands a remarkable stone building, a unique piece of industrial heritage. This is the Derwentcote Steel Furnace, built in the 1730s to convert wrought iron into steel, and the oldest surviving steel furnace in Britain.

The Derwentcote Furnace is a low rectangular stone building with a large conical chimney near one end. The structure provided storage areas for raw materials, for the finished steel output, and space for the actual furnace within the chimney.

Inside the chimney are a pair of sandstone containers, or chests. Iron bars were laid in the chests, packed with alternating layers of powdered charcoal.

Then the furnace was lit and the chests sealed with a mixture of clay and sand. Flues within the chimney sent flames travelling around the containers of iron bars, encouraging the charcoal to diffuse into the iron. This process was known as cementation, and could take three weeks to complete. During that time the temperature within the chimneys reached 1,100 degrees Centigrade. 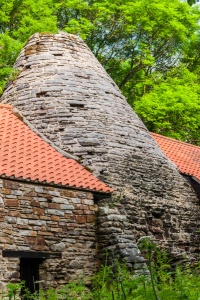 It took 6-10 days for the furnace to reach its maximum temperature, and it had to be fed with fresh coal every three hours. After the cementation was complete it took a further full week to cool down before the bars could be safely removed. This long and drawn-out process was effective, though, producing as much as 10-14 tonnes of 'blister steel' per month.

When the bars had cooled enough to be removed from the furnace they were taken to a nearby mill where they were heated again, and hammered to smooth out the carbon in the steel. The finished steel was then transformed into finished products, including springs and cutting tools. The steel from Derwentcote was of very high quality and was noted for its flexibility and strength.

The Derwentcote Valley was a thriving centre for the fledging steel industry in the early 18th century. The valley had a plentiful supply of the raw materials needed to supply the Furnace. There were natural deposits of clay, sandstone, coal, and charcoal in the area.

In addition, there was relatively easy access to seaports along the North Sea coast, so raw iron bars from Sweden could easily be supplied by ship to Newcastle, then brought overland to Derwentcote by horse and cart. The iron had to be imported because local ore contained sulphur and phosphorus, making it unsuitable for the cementation process.

Derwentcote Furnace remained in operation until 1891. By that time new industrial processes had emerged, notably the Bessemer Steel conversion process, which made the cementation process slow and inefficient by comparison.

The Don Valley near Sheffield emerged as a new centre for steel production. Using the new processes, Don Valley steel could be made faster and more cheaply than Derwentcote steel, so the Furnace eventually became unviable. The building fell into decay until it was rescued and restored by English Heritage in 1990.

There is a parking area on the opposite (south) side of the A694. From the parking area, you have to cross the road and walk west to Forge Lane, the down the lane past several houses until you reach a gated entrance to the Furnace site.

The exterior of the mill can be viewed at any time, and groups can make special arrangements to see demonstrations of the steelmaking process. It seems a shame that the interior is not more regularly open to visitors, especially considering the importance of Derwentcote in the industrial history of the Tyneside area. 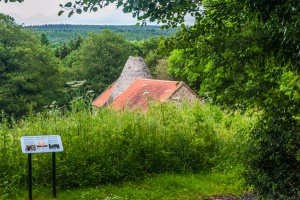 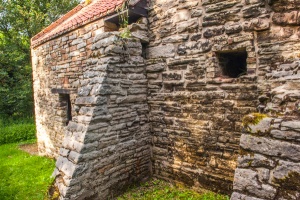 The side wall and buttresses 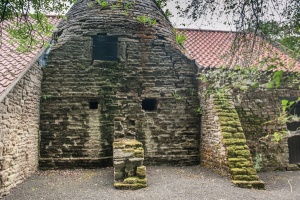 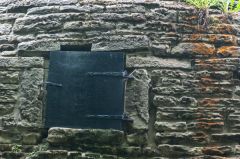